Invasive frogs in Australia have a dangerous appetite • Earth.com 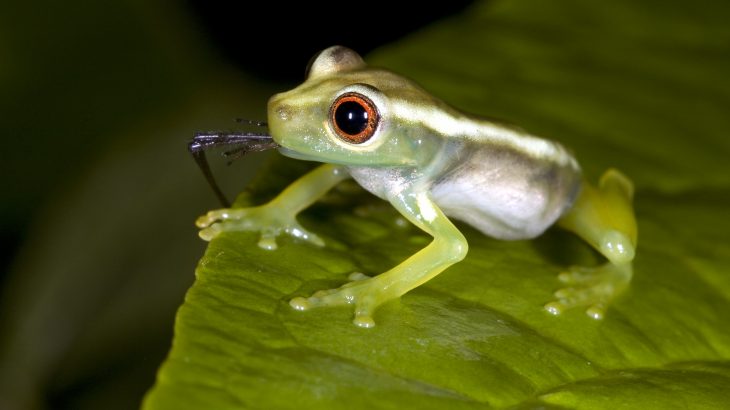 A study from the University of South Australia is shedding new light on a group of invasive frogs in southern Australia. The researchers are warning that the spotted-thighed frog has destructive feeding habits that pose a serious threat to native species.

The invasive frog, Litoria cyclorhyncha, has now become well-established in Streaky Bay, South Australia, with a population of at least 1,000 individuals. The frog hitchhiked its way into the region from Western Australia.

Ecology experts Professor Gunnar Keppel and Christine Taylor said that the potential for the spotted-thighed frog to spread to other parts of Australia is very concerning because of its destructive eating patterns.

“This frog is an indiscriminate eating machine that will devour just about anything it can fit into its mouth,” said Taylor. “We’re talking about a relatively large, predatory tree frog that, as a species, is alien to South Australia, and it could have devastating impacts on invaded habitats.”

“As it eats away at local species, it’s impacting the natural ecosystem, which can displace or destroy local food webs, outcompete native birds, reptiles and mammals for resources, and potentially change natural biodiversity.”

The researchers analyzed the stomach contents of 76 spotted-thighed frogs across three different habitats. Each frog had about six creatures in its stomach, including beetles, spiders, insects, native geckos, young frogs, and mice. Overall, the team estimated that the invasive frogs prey on 200 different species.

Professor Keppel said that it is important for people to understand how detrimental invasive species can be for ecosystems.

He warned that if the spread of spotted-thighed frogs is not kept under control, they could soon dominate many ecosystems in southeast Australia at the expense of the local species.

“The spotted-thighed frog is obviously very mobile. Already it’s managed to travel more than 2,000 kilometers and set up a colony in Streaky Bay. But its considerable tolerance of salinity and potential ability to withstand high temperatures could lead to further geographic spread, and if not controlled, it could extend further eastward into the Murray-Darling Basin,” said Professor Keppel.

“It’s vital that we continue to protect Australia’s biodiversity. Preventing further dispersal of the spotted-thighed frog is a high conservation priority.”

“The state government should consider managing the invasive population of spotted-thighed frogs at Streaky Bay. This should include education programs to inform people about what to do if they find a frog, as well as the feasibility of exterminating the population in South Australia.”

“Importantly, if you do see one of these critters in your travels – leave it be. We don’t want it hitchhiking any further.”

The study is published in the Australian Journal of Zoology.