Will kite power fly high as the next renewable energy solution? • Earth.com 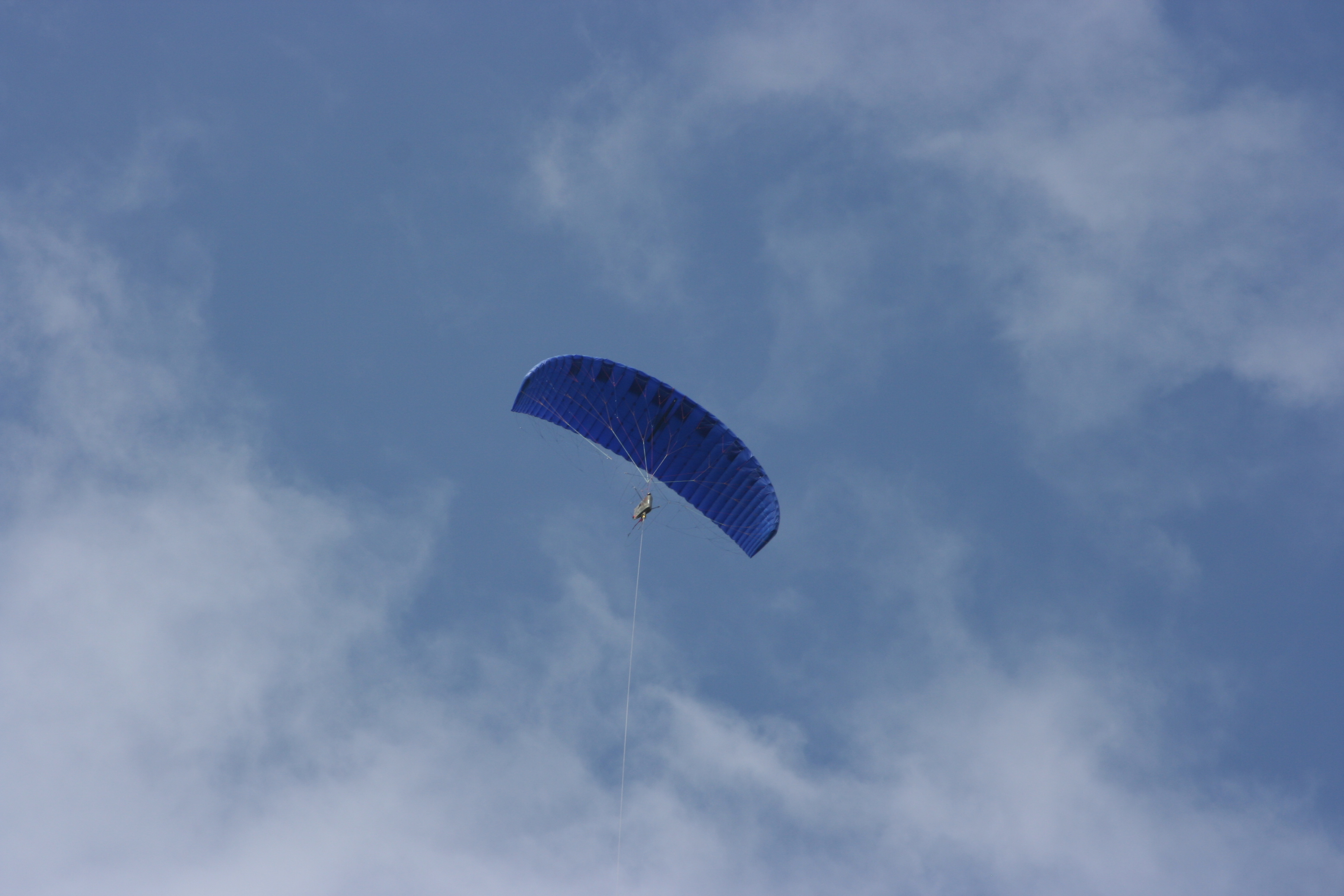 Will kite power fly high as the next renewable energy solution?

What’s not to love about an energy source that’s free, endlessly abundant and non-polluting? That’s what renewable energy advocates would say about wind power. And yet, it’s not ideal in a lot of ways.

The turbines that harness the wind are tall and massive, using up a lot of steel and concrete in their construction, and they take up a lot of land. They’re not very efficient, they’re noisy and the spinning blades kill tens of thousands — or millions — of birds annually, depending on who’s tabulating. In addition, the big turbines frequently break down and are considered an eyesore by some. Take, for example, the fact that the late Senator Ted Kennedy was involved in legal proceedings to block the establishment of a wind farm off Cape Cod coastal waters in his sight line. If the liberal senator from Massachusetts couldn’t put up with the view, can you find enough available land to set up all of the massive-footprint turbines we’d need to even significantly power the nation by wind?

But what if you could solve all of the problems of wind energy production by adopting a whole new wind-capture technology. One with a much smaller footprint, much lower construction and maintenance costs and so visually and sonically unobtrusive that most people wouldn’t even notice it if they lived a mile away from such a wind farm. And what if that power could be generated at rates that were competitive to coal and natural gas?

We’re talking about airborne wind energy, or kite power. The concept is to use the motion of huge tethered kites  or wings (some look more like 84-foot wide parachute canopies) to generate energy in a variety of ways. One technology places turbines on each of the wings to create electricity, and then sends it down a wire to the ground station. Another method sets pumping cycles  in motion as kites are reeled out and reeled in on its tether, generating the electricity at the ground station level.

Although both conventional and kite systems use wind to make electricity, that’s where the similarities end. Wind is hard to consistently catch near the ground, which is why turbines must be built so tall. It’s much windier, say, 300 or even 500 feet above ground, so that’s how high the blades must reach. In order to support building to such impressive heights, the platform base of the tower must be truly massive and deeply entrenched in the ground. The base for one turbine can be fifty feet in diameter, using more than a thousand tons of concrete and steel rebar, and might be anchored as much as thirty feet below surface.

Kite technology, on the other hand, consists of little more that one or more gigantic kites on cable tethers, and the low-lying ground station that houses the generator, tether motor, generator, gear box, pulleys, belts and the like. The kites can go thousands of feet in the air to find and continuously use constant and predictable wind patterns. There’s no such thing as a windless day when you go up that high. In some technologies, computer programs help reposition the kits to take advantage of the best winds.

Dr. Roland Schmehl, associate professor of aerospace engineering at Delft University of Technology in the Netherlands, said this about the greater efficiency of kite power over standard wind turbines in a TED Time talk on YouTube.

“We looked at the concept of the wind turbine and realized that the last 25 percent of the rotor blade actually makes more than 50 percent of the energy, so why don’t we decouple the rotor blade from the hub and move it as a free-flying wing into the air. That way we can move it at high speed and have a very high energy density on this wing.”

The Delft University group is only one that’s exploring the possibilities. Another, Makani Power, was recently bought by Alphabet, the parent company of Google, and is testing kite technology in California. In Europe, work is being done in Scotland, Italy and elsewhere.

One of the pioneering companies  in the technology is Kite Power Systems (KPS), a United Kingdom-based company testing the technology in a military airfield in Scotland. In an email exchange with Earth.com, KPS interim CEO and Business Development Director David Ainsworth had this to say about how he thinks kite power will impact conventional wind turbine technology.

“It’s too soon to say whether kite power will overtake conventional wind turbines, but our technology transforms the economics of offshore and onshore wind power,” Ainsworth wrote. “We are expecting our patented technology to cut offshore costs by 50-60% in a number of ways: reduced need for steel or concrete, lower transport, installation and deployment costs (no jack-up vessels required), cheaper running costs, and a higher capacity factor as the wind resource at high altitude is better.  In our view, the offshore market gives us greater scope and opportunity for our systems to be deployed. However, we do see that there is a significant onshore market for our technology.”

That lack of a footprint is a major consideration of kite power enthusiasts. The technology uses 90 percent less building materials than conventional turbines and, according to online information provided by Makani Power, it can generate 50 percent more energy.

Also consider maintenance costs. When a kite needs repairs, you reel it in and do the work on the ground. Not so much if it’s a turbine blade 300 feet high that goes haywire.

Too good to be true? Well of course there are challenges to this, as well as any developing technology. KPS’s Ainsworth writes of some of those roadblocks.

“Like any early stage technology, we encounter challenges (mainly technical) but we are pleased with the progress that we are making. Additional challenges could be with airspace regulators and other users, and we are learning from the lessons learnt by Horizontal Axis Wind Turbine [regarding] impacts on the natural environment (bats and birds). The investment by Shell, E.ON and Schlumberger (announced in December 2016) is a massive endorsement of our work to date and a statement of intent.”

Ainsworth also wrote that the company anticipates showcasing three megawatt and several 500 kilowatt kite systems to demonstrate the technology within the next three to five years. KPS also plans to land its first customer within that time frame.

It’s a start. Visionary innovators within the field can see wind farms of 1,000 very high-flying kites powering our future. Or a single system energizing a community center in a desert village far off of the power grid. They see kites flying so high they’re barely dots in the sky, but they’re cleanly powering our homes and businesses.

Stand by. The future of airborne wind technology is still up in the air. But it’s in sight.