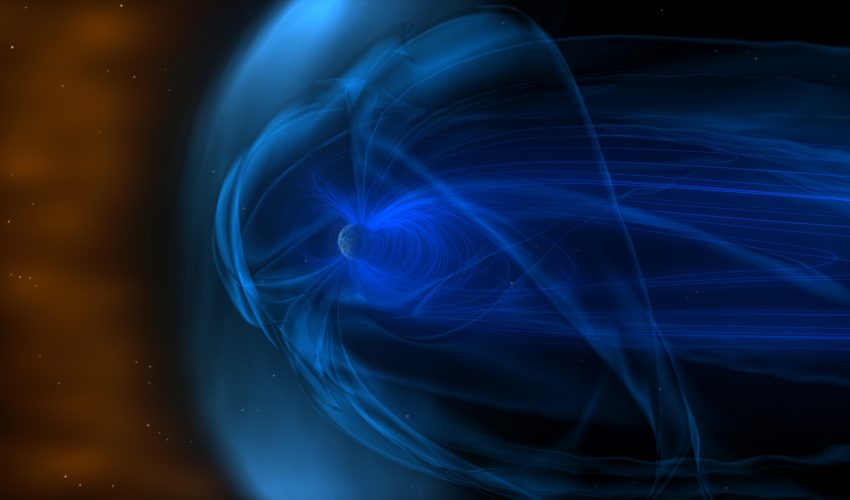 A study from the University of Maryland (UMD) has revealed new clues about the energy conversion process that occurs when the Earth cuts a path through solar wind. The findings of the research are providing scientists with a better understanding of how the Earth’s magnetic field protects our planet from harmful particles and radiation.

When the Earth encounters supersonic solar wind, a shock wave forms just outside of the magnetosphere. This shock wave is called a bow shock, named after the bow-shaped wave that forms on water just ahead of a motorboat.

Scientists have not been able to fully explain how our planet’s magnetic field can plow through the stream of charged particles that make up solar wind without causing chaos. It has been previously established that the bow shock converts energy from solar wind to heat, and now researchers have observed this electron heating process for the first time.

“If you were to stand on a mountaintop, you might get knocked over by a fast wind,” explained Chen. “Fortunately, as the solar wind crashes into Earth’s magnetic field, the bow shock protects us by slowing down this wind and changing it to a nice, warm breeze. We now have a better idea how this happens.”

The researchers found that when the electrons in solar wind meet the bow shock, the electrons accelerate to such a high speed that their stream becomes unstable and breaks down. During this breakdown process, the electrons lose their high speeds and the energy is converted to heat.

The scientists used data from NASA’s Magnetospheric Multiscale (MMS) mission, including hundreds of high-frequency measurements captured every 30 milliseconds within the bow shock layer.

“The extremely fast measurements from MMS allowed us finally to see the electron heating process in the thin shock layer,” said Moore. “This is groundbreaking because now we have the ability to identify the mechanism at work, instead of just observing its consequences.”

The scientists were surprised by the fact that the bow shock is able to convert the energy in electrons to heat without any friction between the electrons.

The researchers had a rare opportunity to observe the solar wind’s electron stream before, during, and after its encounter with the bow shock. They found that the electron stream took just 90 milliseconds to destabilize and fully break down after being accelerated by the shock wave.

“The study of electron heating is important not just for understanding how the bow shock protects Earth, but potentially for satellites, space travel and maybe exploring other planets in the future,” said Chen.

The research is published in the journal Physical Review Letters.