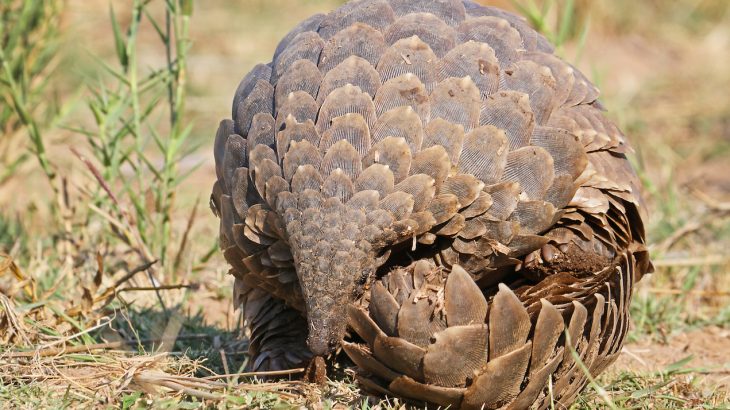 On December 6, Malaysia set fire to close to three tons of seized pangolins scales, worth $9 million in the illicit wildlife market. This incineration makes an important statement to wildlife traffickers but some in the conservation field question the effectiveness of wildlife product burnings.

According to the wildlife trade monitoring group TRAFFIC, the country of Malaysia burned 12% of their total scales from pangolin seizures in 2017. The three tons of pangolin scales came from three separate seizures by the Royal Malaysian Customs.

“Malaysia has emerged as a transit hub for the illicit trade of pangolins from Africa to Asia. Over a seven-month period between May and November 2017, Malaysia seized a whopping 17,131 kg of pangolin scales in 10 shipments originating from Africa,” the group states.

As Earth.com has previously reported, pangolins are currently facing a global, and little known, crisis as a result of wildlife trafficking. The pangolin currently holds the title of the most trafficked mammal in the world with an estimated one million individuals taken from the wild in the last decade alone. All eight species of pangolins are currently listed on Appendix I of the Convention on International Trade in Endangered Species of Wild Fauna and Flora affording them the highest international protection in the wildlife trade. Despite this protection, the illegal trade in pangolins has been rampant.

The species is in high demand in the wildlife market for its meat, skin and scales. Pangolin skins have been used to make boots, shoes and leather and the scales are commonly used for traditional medicine. The recent burning of pangolin scales ensures these products never enter the wildlife market and symbolizes the country’s commitment to protecting the species.

The burning of wildlife products has become a common practice for countries across the world. Countries accumulate wildlife products as they continue to thwart trafficking efforts. Instead of simply holding onto the illicit products, countries have gotten creative in efforts to deter wildlife traffickers.

In 2016, Kenya burned 105 tons of ivory in the largest ever ivory stockpile burn. This burn took out ten percent of the global stock of elephant ivory. The United States burned six tons of elephant ivory in 2013 and two tons in 2017. Between 1989 and April 2016, over 100 tons of ivory was destroyed, with the practice gaining momentum in the later years.

Kenyan president Uhuru Kenyatta stated during the ivory burning ceremony, “Kenya is making a statement that for us ivory is worthless unless it is on our elephants. This will send an absolutely clear message that the trade in ivory must come to an end and our elephants must be protected. I trust that the world will join us to end the horrible suffering of our herds and save our elephants for future generations.”

Critics of the practice worry that destroying large amounts of wildlife products will only make the remaining wildlife products more valuable. Botswana, South Africa, Namibia and Zimbabwe have even proposed that their stockpiles of seized wildlife products should be sold and the proceeds be used for wildlife conservation.

Botswana, Namibia and Zimbabwe were allowed to sell part of their ivory stockpiles in a one-off sale to Japan in 1999 and to China and Japan in 2008, with South Africa also participating in this one-off sale. These one-off sales could have enabled wildlife traffickers to launder their illegal products, as it is can be impossible to distinguish between legal ivory bought in a one-off event and poached ivory products. Botswana, home to the largest population of wild elephants, has since changed their viewpoint on the issue and support ending the international trade in elephant ivory permanently.

A 2016 study published by the National Bureau of Economic Research found a 66% increase in illegal ivory production across two continents and 71% increase in ivory smugglings out of Africa after the 2008 one-off ivory stockpile sale. While the price of ivory fell after the one-off sale, the researchers believe that the sale helped to de-stigmatize ivory causing increased demand for the product.

Some countries want to go beyond one-off sales by lifting the ban on the international trade of ivory products. By holding on to stockpiles of illicit wildlife products, these countries could make huge profits if the ivory trade was re-opened. The countries who choose to burn their stockpiles make it clear that they are not holding out hope for a legalized international ivory trade.

While wildlife product burnings are likely to remain a contentious issue in the conservation field, it is clear that the seizure of three tons of pangolins scales is a major conservation win for the much imperiled species.