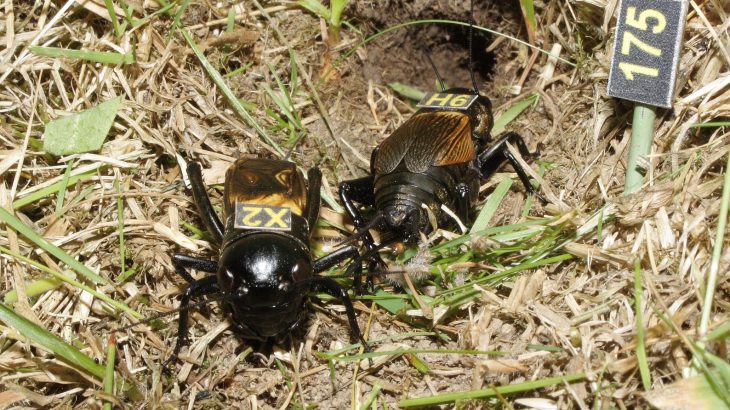 Male crickets age more slowly with plenty of females around

A new study from the University of Exeter has found that male crickets age more slowly when they are surrounded by plenty of females. Even though the entire lifespan of a field cricket only lasts about 90 days, the researchers determined that the insects still experience age-related physical decline.

The investigation compared years when male and females were evenly distributed to years when there were twice as many females. The study revealed that when females were abundant, the rate of male mortality associated with age was reduced by around 50 percent.

“The leading theory for why animals fall apart as we get old is that we use up our energy on reproduction instead of maintaining our bodies,” said Dr. Rolando Rodríguez-Muñoz. “If this theory is right, we would expect that when males have to compete more vigorously, they should age faster.”

“We studied a population of crickets in a Spanish meadow where years vary in the relative numbers of males and females. As predicted, males in years with more competition aged faster.”

Age-related decline was measured by how much the males chirped, a behavior used to attract females and to deter other potential male mates. In addition to becoming more frail, males experienced a rapid decline in chirping during years with equal numbers of males and females. When females outnumbered the males, however, there was no decline.

“Our study shows that even male insects pay the costs of reproductive competition in later life,” said Professor Tom Tregenza. “It seems that battling with rivals is more of a drain on males than mating with more females.”

“The declines that organisms experience as they age are a consequence of how they use their resources earlier in their lives. For males, life is easier when females are more plentiful.”