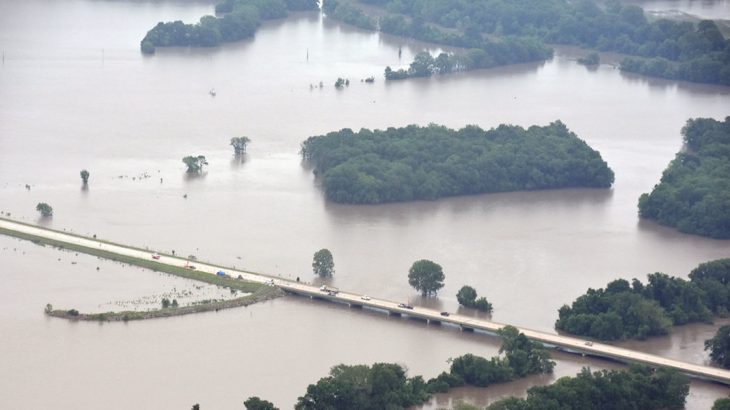 A new study from Jude Kastens, an associate research professor with the Kansas Applied Remote Sensing Program at the Kansas University Biological Survey, finally addresses the lack of real-time, wide-area predictions for floodwater extent and depths, an information gap that has plagued officials during previous major flood events.

“I worked with the Kansas Water Office in May,” Kastens said. May 2019 was the wettest month ever recorded in Kansas. “The ground was saturated, and the reservoirs were getting full, and with a lot more rain in the forecast, major flooding across central and eastern Kansas was looking imminent.”

“Some years ago we’d developed this inundation library largely in collaboration with the Water Office and the Kansas GIS Policy Board but had never had the chance to put it through its paces in real time,” he continued. “It was based on the approach that I developed for my dissertation, and we had flood libraries for the greater eastern half of Kansas, based on the gauged stream network.”

“For instance,” he said, “if you drive south of Lawrence on Highway 59, you’ll see a USGS stream gauge box by the bridge over the Wakarusa River. There are about 200 gauges in Kansas that collect real-time stream stage information, and in times of flood, the National Weather Service provides stage forecasts several days out for a lot of these. We can take these data and map estimated current or future flooding, between gauges or around one.”

Kasten developed a model, dubbed FLDPLN, or “Floodplain,” which maps potential inundation as a function of stage height by using basic hydrologic principles and gridded elevation data. The model doesn’t include many inputs or much supervision, therefore has an advantage over existing mapping methods like the more complicated (though, more precise) FEMA hydrodynamic models, which map 100-year floodplains.

By working with Kansas officials, Kastens was able to narrow down three critical locations where his mapping model was most needed — a 100-mile stretch of the Neosho River south of the John Redmond Reservoir, the Neosho and Cottonwood rivers above John Redmond, and Salina, home to the Saline River and Mulberry Creek.

Kastens’ model helped the Army Corps of Engineers when they were planning a release of large volumes of water from the John Redmond Reservoir, which had almost reached capacity. He was able to inform local leaders and the public of the potential flooding extent.

He hopes to automate the mapping process in order to lessen the amount of work officials must do when rivers and streams threaten to flood.

“Time is of the essence during major flood events,” Kastens said. “We need to develop software tools to help automate the mapping process and hand it off to these other agencies so they have the freedom to map whichever scenarios they want. So, when that next flood hits, emergency response personnel can just run the models as they see fit.”

Furthermore, Kastens has already worked with a private firm to commercialize his technology and provide services to emergency management officials and those with flood-prone properties outside beyond Kansas.