Marine jellies were the first animals, not sea sponges • Earth.com 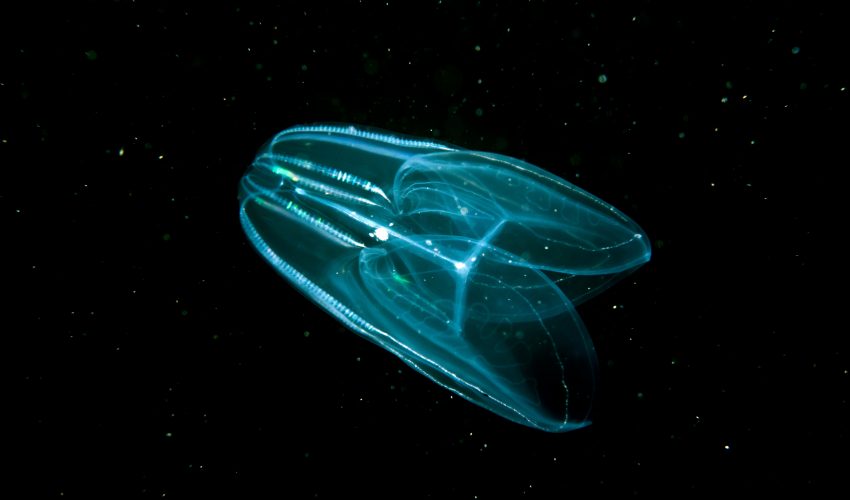 Marine jellies were the first animals, not sea sponges

Although the scientific community is generally supportive of most avenues of research and forms of methodology, there are some questions that put scientists at odds. For the last decade, zoologists in particular have been arguing over the question, “what is the oldest branch of the animal family tree?”

It has been long thought that sponges were the earliest animals, as scientists have organized the animal family tree based mostly on their judgment of the relative complexity of groups of organisms – and it doesn’t get much less complex than a sponge.

However, it has been argued that a group of marine predators called comb jellies – also known as ctenophores – were actually the first members of the animal kingdom. The answer to this question could have a significant effect on how scientists’ think about the evolution of the nervous system, digestive tract, and other basic organs that are necessary to our survival today.

A team of evolutionary biologists from Vanderbilt University and the University of Wisconsin-Madison believe they have come up with the answer. The researchers designed a new approach specifically built to settle this phylogenetic tree-of-life argument – and the comb jellies won.

In the field of phylogenomics, scientists are causing a paradigm shift due to the wealth of information provided by the DNA of every living – and non-living – organism. Genetic information can be used to define and redefine evolutionary relationships. However, in some cases the bloom of available genetic information has only intensified controversies such as the sea sponge vs. comb jelly battle royale.

In 2008, one of the earliest phylogenomic studies pointed to the comb jelly as the earliest member of the animal kingdom, sparking a controversy that ignited the zoological community more so than if it had been doused in gasoline.

In response to the 2008 study, a corresponding study was published last month that included a massive amount of genetic data ultimately supporting the sponge’s claim to the first animal throne.

“The current method that scientists use in phylogenomic studies is to collect large amounts of genetic data, analyze the data, build a set of relationships and then argue that their conclusions are correct because of various improvements they have made in their analysis,” says Antonis Rokas, Professor of Biological Sciences at Vanderbilt University. “This has worked extremely well in 95 percent of the cases, but it has led to apparently irreconcilable differences in the remaining 5 percent.”

In an effort to shine some light on these darkened battlegrounds, Rokas and his collaborators focused on 18 of these controversial relationships. They did so by comparing the individual genes of the leading contenders in each relationship.

“In these analyses, we only use genes that are shared across all organisms,” explains Rokas. “The trick is to examine the gene sequences from different organisms to figure out who they identify as their closest relatives. When you look at a particular gene in an organism, let’s call it A, we ask if it is most closely related to its counterpart in organism B? Or to its counterpart in organism C? And by how much?”

The research team would perform this analysis with hundreds of thousands of genes, comparing the results from each gene to one of the two possible hypotheses. In the end, they found that comb jellies have significantly more genes that support their “first to diverge” status in the animal lineage.

It remains to be seen if this is the final word on the comb jellies vs. sea sponges front. However, it appears to be the most comprehensive argument to date. The researchers are confident that their analysis can be used to settle disputes such as this throughout the scientific community. “We believe that our approach can help resolve many of these long-standing controversies and raise the game of phylogenetic reconstruction to a new level,” says Rokas.

More information on this study can be found in the journal Nature Ecology & Evolution.