The ability to glow protects marine plankton from predators • Earth.com 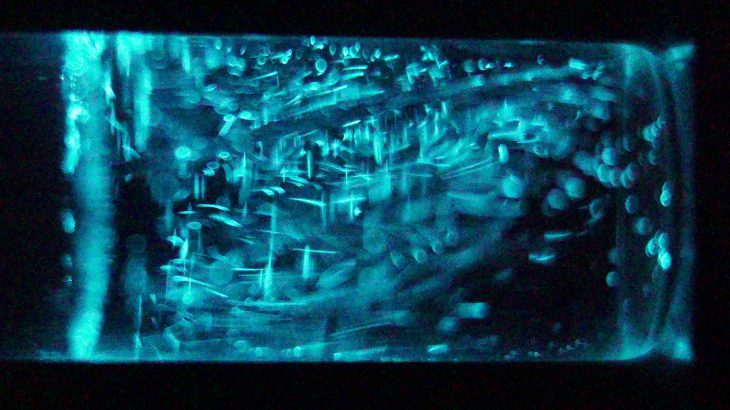 The ability to glow protects marine plankton from predators

Some marine plankton classified as dinoflagellates are bioluminescent, lighting up themselves and the waters surrounding them with an incredible glow. A new study has revealed that one particular dinoflagellate species, Lingulodinium polyedra, uses this ability to deter predators called copepod grazers.

“That bioluminescence, in addition to being a beautiful light phenomenon in the sea, is a defensive mechanism that some species of plankton use to ward off their enemies,” said Andrew Prevett of the University of Gothenburg.

“The bioluminescent cells sense very low concentrations of their grazers and turn up the light when needed, which is rather impressive for a unicellular organism. This in turn helps to better protect them from their grazers, letting them survive longer to reproduce and therefore compete better within the plankton.”

By studying high-speed and low-light sensitive videos, the research team found that the bioluminescent cells flash upon contact with the copepod grazer, and the copepod rapidly rejects the flashing cell.

Observational data from the west coast of Sweden confirmed the theory that the presence of copepod grazers would increase the abundance of bioluminescent L. polyedra. These single-celled dinoflagellates have a competitive disadvantage because they grow at about a third of the rate of other plankton. However, copepods reject L. polyedra and turn to faster-growing plankton species that have poorer defenses.

The researchers assumed that increased bioluminescence would result in reduced grazing by copepods, but the reduction was much greater than what they had anticipated.

“Earlier studies had shown that dinoflagellates with naturally brighter bioluminescence than L. polyhedra were grazed less but still required cell concentrations to be relatively high before all grazing on the bioluminescent cells ceased,” said Prevett. “L. polyedra abundance in our study is low by comparison, and we were surprised at how effective the bioluminescence defense became despite this.”

It is still not clear how the glow protects L. polyedra, but Prevett described three popular theories.

“The first is that it acts as aposematic coloration, a warning to potential grazers that the cell is toxic or harmful to the grazer in some way,” explained Prevett. “The second is that the flash of bioluminescence behaves like a flash-bang and startles the copepod, provoking a copepod escape response or disorienting it long enough for the dinoflagellate to escape.”

“The third theory suggests that the flash acts as a form of burglar alarm, attracting the attention of a larger visual predator, like a fish, which could track and consume the copepod. There is evidence to support each of these theories and bioluminescence protection could be combinations of some or all of the above.”

Regardless of how it works, the researchers said their ability to ward off predators with bioluminescence seems to serve as a key mechanism behind the success of an otherwise poor competitor such as L. polyedra.