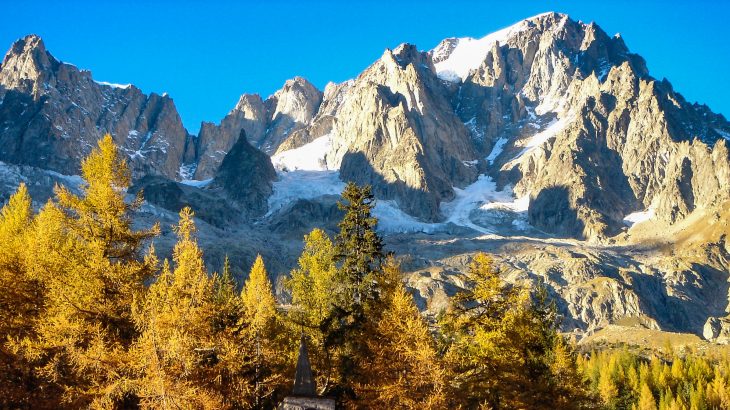 Experts are warning that a large portion of the Planpincieux glacier could collapse on the Italian side of Mont Blanc. According to reports, 500,000 cubic meters of ice could come crashing down as the movement of the glacier has recently accelerated.

Tourists were evacuated Wednesday from the alpine resort town of Courmayeur in Northern Italy’s Valle d’Aosta. Valerio Segor is a glacier expert and the region’s director of natural risk management. At a press conference on Friday, Segor emphasized the urgency of the evacuation.

“The measure could not be postponed following a survey of the glacier of Planpincieux that shows a section of 500,000 square meters of ice that could rapidly detach from the rock.”

Segor said the next 72 hours will be critical for the fate of the Planpincieux Glacier, which is about the size of a football field.

The area has been monitored since 2012, but the potential for the glacier to collapse has heightened after temperatures rose in late July and early August. The heatwave accelerated the glacier’s retreat, causing it to lose as much as 23 inches of ice per day.

Last year, the Intergovernmental Panel on Climate Change (IPCC) warned that glaciers around the world, excluding Greenland and Antarctica, are losing 220 billion metric tons of ice a year and this rate continues to climb.

According to the IPCC report, if greenhouse gas emissions are not reduced, these glaciers will shrink by 36 percent this century. Smaller glaciers, like those in the Alps, will lose up to 80 percent of their ice in the same timeframe.

The latest news of the Planpincieux glacier comes just after the last fully intact ice shelf in the Canadian Arctic collapsed at the end of July. In just two days, the Milne Ice Shelf shrank by about 80 square kilometers, losing more than 40 percent of its area.

“Entire cities are that size. These are big pieces of ice,“ said Luke Copland, a glaciologist at the University of Ottawa. “This was the largest remaining intact ice shelf, and it’s disintegrated, basically.”

The Milne Ice Shelf is a fragment of the former Ellesmere Ice Shelf, located in the Qikiqtaaluk Region, Nunavut, Canada. Ellesmere also lost two ice caps this summer that were believed to be several centuries old.

Mark Serreze is the director of the National Snow and Ice Data Center (NSIDC) in Boulder, Colorado. In 2017, the NSIDC team published a study predicting that the ice caps would disappear within five years.

“We saw them going, like someone with terminal cancer. It was only a matter of time,” said Serreze. The loss was confirmed last month, when NASA satellite images of the region revealed a complete lack of snow and ice, said Serreze. He studied the ice caps as a graduate student on his first trip to the Arctic years ago. At that time, he said, the caps had seemed like immovable parts of the geography.

“When I was there in the 1980s I knew every square inch of those ice caps. You have the memories. It’s like your first girlfriend.”

According to Serreze, two additional ice caps on Ellesmere called Murray and Simmons are also diminishing and are likely to disappear within 10 years.

“If we reduce emissions sharply, the consequences for people and their livelihoods will still be challenging, but potentially more manageable for those who are most vulnerable,” said Hoesung Lee, Chair of the IPCC.

“The open sea, the Arctic, the Antarctic and the high mountains may seem far away to many people. But we depend on them and are influenced by them directly and indirectly in many ways – for weather and climate, for food and water, for energy, trade, transport, recreation and tourism, for health and well-being, for culture and identity.”