Measuring the impact of human activity on marine mammals • Earth.com 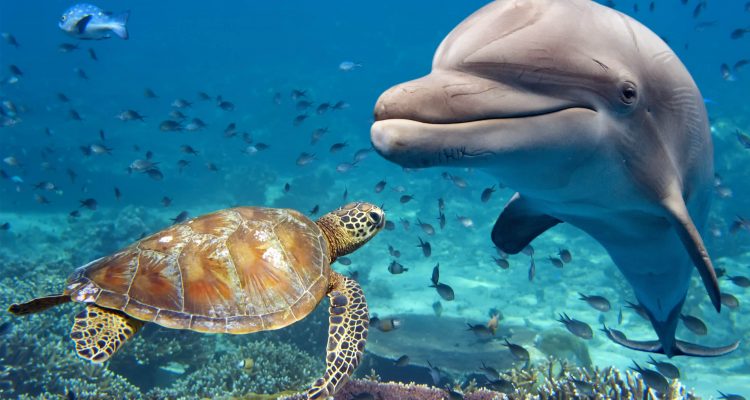 Measuring the impact of human activity on marine mammals

Byadmin
Earth.com staff writer
Rising levels of noise in the ocean have been identified as a growing concern for the well-being of marine mammals, but other threats such as pollution, climate change, and prey depletion by fisheries may also harm marine mammals and influence their response to additional noise. Current knowledge and data are insufficient to determine what combination of factors cause the greatest concern, says a new report by the National Academies of Sciences, Engineering, and Medicine. The report includes a newly developed conceptual framework model to help federal agencies and research communities explore the potential cumulative effects of human activities on marine mammals.

Building on previous Academies reports that explored the impact of sound on marine mammals, this report places sound in the context of other stresses that these animals may experience. The report highlights three main challenges in making progress on this issue of cumulative effects: understanding the interaction between different stress-causing agents (stressors), designing studies to better understand the response to more than one stressor, and the difficulty in detecting impacts at the population level.

While experiments are useful in defining the relationship between exposure level (the dosage) and a behavioral or physiological response to one stressor, it is typically impractical to test the interaction among varying dosages of multiple stressors. The conceptual framework recommended in the report is designed to help researchers address discrete aspects of the problem and develop tools to help assess how these various factors affect marine mammals. One tool recommended by the committee is a real-time, centralized system for reporting health data of different populations.

“Current scientific theory and data for individual marine mammals or their population is not enough to predict the total risk from a combination of threats,” said Peter L. Tyack, professor of marine mammal biology at the University of Saint Andrews in Scotland and the chair of the committee that conducted the study and wrote the report. “The model we developed in this report provides a way to examine the effects associated with the exposure to a single stressor in the context of the cumulative effect of other stressors in the animal’s environment.”

Although the impacts from some stressors such as persistent chemical pollutants or ocean climate cannot be readily reduced, others like noise, fisheries, or shipping routes can be managed to reduce their impact. For managers to be able to decide how best to reduce the effects of activities that threaten the mammals, researchers need to develop methods to assess how changes in a combination of stressors can best bring the population to a healthy resilient state. For example, research shows reduced noise associated with lessened commercial shipping after the terrorist attacks on the World Trade Center and Pentagon on Sept. 9, 2001, was associated with reduced stress hormones among the right whales than seen earlier.

The committee also recommended using a framework that assesses the health of individual mammals impacted by an activity, and using changes in health to determine how it could eventually affect populations. For example, North Atlantic right whales, a protected species since the 1930s, still have an extremely low population size, are exposed to noise and chemical pollutants, and also encounter physical injury during their lengthy migration due to entanglement in fishing gear and collisions with shipping vessels. Archived records of their life histories, including photos and drawings, have helped provide information on health variations and locations over time. Researchers have used these data to determine certain causes of decline in the population, such as a dramatic decrease in the health of female whales and low reproduction coinciding with reduced prey availability. These different relationships can be used in the proposed framework to detect early warning signs of risks to populations. The report says federal agencies and other research funders should support efforts to develop case studies such as the right whales and apply this model to other marine mammal populations.

The report recommends building affordable surveillance systems that can detect changes in population parameters such as size or reproductive rate and hence indicate when populations may be at risk due to exposure to stressors. Additionally, the committee proposed a decision tree that helps identify when interactions between stressors should be studied as high priority when considering the effect of a focal stressor on a population.

The study was sponsored by the Office of Naval Research, the National Oceanic and Atmospheric Administration, the Bureau of Ocean Energy Management, and the Marine Mammal Commission. The National Academies of Sciences, Engineering, and Medicine are private, nonprofit institutions that provide independent, objective analysis and advice to the nation to solve complex problems and inform public policy decisions related to science, technology, and medicine. They operate under an 1863 congressional charter to the National Academy of Sciences, signed by President Lincoln. For more information, visit http://national-academies.org. A roster follows.

Copies of Approaches to Understanding the Cumulative Effects of Stressors on Marine Mammals are available at http://www.nap.edu or by calling 202-334-3313 or 1-800-624-6242. Reporters may obtain a copy from the Office of News and Public Information (contacts listed above).

THE NATIONAL ACADEMIES OF SCIENCES, ENGINEERING, AND MEDICINE

Division on Earth and Life Studies