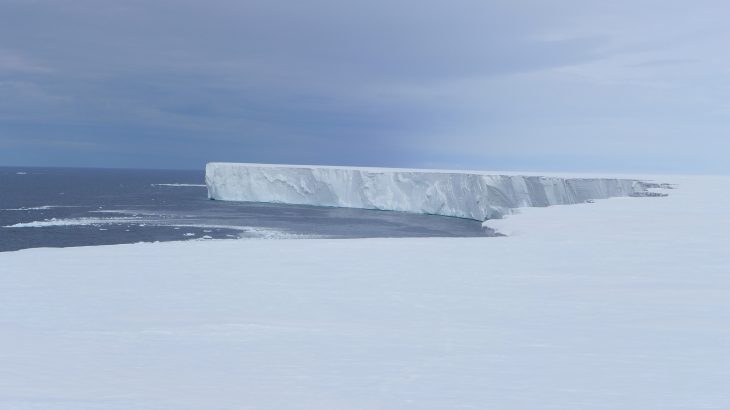 Solar heated surface waters are melting the world’s largest ice shelf. The Ross Ice Shelf in Antarctica is the largest ice platform in the world, covering an area about the size of France. An international team of researchers led by the University of Cambridge has now discovered that the massive ice shelf is melting ten times faster than what was previously realized due to the inflow of warm surface waters in the surrounding ocean.

Over the course of four years, the scientists investigated how the northwest region of the ice shelf interacts with the ocean beneath it. The Ross Ice Shelf stabilizes the West Antarctic ice sheet by blocking ice that flows in from some of the world’s largest glaciers.

“Previous studies have shown that when ice shelves collapse, the feeding glaciers can speed up by a factor or two or three,” said study co-author Dr. Poul Christoffersen. “The difference here is the sheer size of Ross Ice Shelf, which over one hundred times larger than the ice shelves we’ve already seen disappear.”

By deploying instruments through a 260 meter-deep borehole, the team collected data on temperature, salinity, melt rates, and ocean currents in the cavity under the ice. The researchers also used an extremely precise radar system to survey the changing thickness of the ice shelf.

The study revealed that solar heated surface water flows into the cavity under the ice shelf near Ross Island and nearly triples the rate of ice melt during the summer months. The findings suggest that the forward section of the ice shelf will melt more quickly in response to changes in the uppermost layer of the ocean than what has been expected.

“Climate change is likely to result in less sea ice, and higher surface ocean temperatures in the Ross Sea, suggesting that melt rates in this region will increase in the future,” said Dr. Stewart.

The rapid melting identified in the study is taking place beneath a thin and structurally important part of the ice shelf, where the ice pushes against Ross Island. This contact with the island slows the flow of the entire ice shelf.

“The observations we made at the front of the ice shelf have direct implications for many large glaciers that flow into the ice shelf, some as far as 900 km away,” said Dr. Christoffersen.

The researchers emphasized that the study results do not mean that the ice shelf is currently unstable. The research has, however, identified the Ross Island pinning point as a site of future vulnerability.