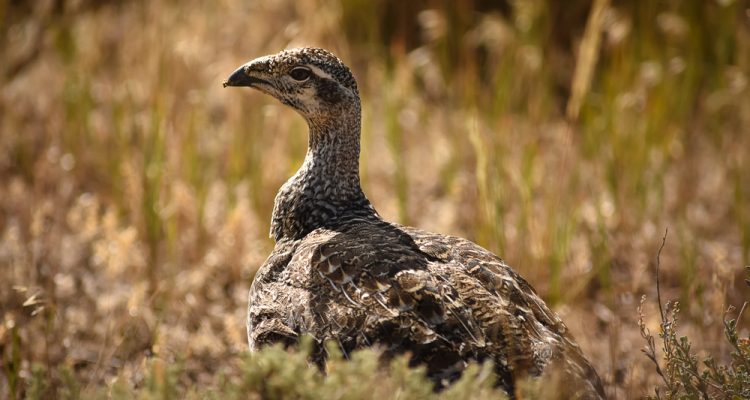 The Obama administration has ruffled some feathers with five potential plans that would limit mining projects on federal land to protect the greater sage grouse.

Greater sage grouse numbers have been in decline in recent years as they lose habitat to development and industrial projects such as mining. Between 200,000 and 500,000 are left in the western U.S.

The sage grouse is important because rises and falls in its numbers can be a bellwether for the health of sagebrush ecosystems in the West. Much like the canaries once used by miners, when the birds begin dying, other animals tend to follow.

None of the options restrict currently approved mining and energy exploration projects, though future oil and gas drilling projects would need to use directional drilling from a distance to avoid disturbing the grouse.

It would be up to the incoming Trump administration which of the plans – if any – to put into place.

But the plans have drawn skeptics.

“Federal land grabs are never popular in Nevada and the latest one by the BLM is no different,” Sen. Dean Heller of Nevada said in a statement. “A mining ban does little to help sage-grouse and will devastate northern Nevada’s future economic competitiveness.”

He would work with the Trump administration to focus sage grouse protection efforts on preventing wildfires, not private mining projects on federally owned lands, he said.

The Bureau of Land Management has teamed with the U.S. Department of Agriculture and ranchers across the western states in the Sage Grouse Initiative. The project partners private landowners with public lands managers to protect and maintain sage grouse habitat. Efforts include removing invasive plant species from sage land, restoring wet meadows, and wildfire prevention.

On the other side of the aisle is Randi Spivak, the public lands program director for the Center for Biological Diversity. She called on incoming Interior Secretary Ryan Zinke, a Montana politician who calls Teddy Roosevelt his inspiration to follow in Roosevelt’s footsteps and conserve sage grouse habitat on public lands.

On Twitter, Spivak thanked President Obama and his administration for moving to designate nearly 2 million acres of public lands as national monuments. The Center for Biological Diversity has also launched a “resistance movement” called Earth2Trump to fight what they view as attacks on the environment and civil rights by the President-elect.

The administration’s proposed plans are part of a promise it made in September 2015. At that time, it chose not to list the prairie bird for protection under the Endangered Species Act. The administration, along with the BLM, U.S. Fish and Wildlife Service, and U.S. Forest Service, believed that the sage grouse could be protected without being placed on the endangered list.

Protection under the Endangered Species Act would have strictly limited mining, agriculture, drilling, and other activity in sage grouse habitat on both public and privately owned lands.

The greater sage grouse is listed as “near threatened” by the Red List, maintained by the International Union for Conservation of Nature to monitor which species are in danger of going extinct. “Near threatened” is the first step away from “least concern.”

The plans proposed by the Obama administration are available to review as a PDF from the Bureau of Land Management.