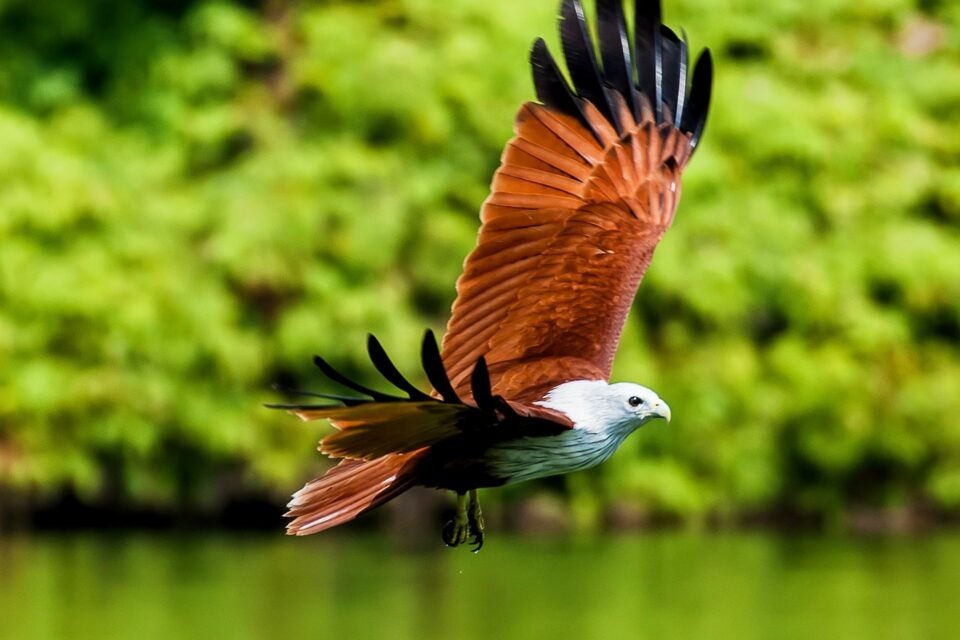 Birds evolved from theropod dinosaurs during the mid-Jurassic Period, around 160 million years ago. Today, birds are very different from their dinosaurian ancestors, and have a small, lightweight body and wings with a covering of feathers. Although most research on evolutionary changes in birds has focused on their flight ability, there is another aspect of bird morphology that sets them apart from dinosaurs – birds have kinetic skulls. This means that they can move their skull bones relative to each other and, as seen in most modern birds, they can lift the upper beak independently of the brain case.

Dinosaurs had akinetic skulls that had no mobile joints or bending zones. This is illustrated by crocodiles today, which have rigid skulls with little or no kinesis, enabling them to bite with considerable force. In contrast, some snakes show extreme cranial kinesis and can move their jawbones independently in order to swallow prey. Details of how or when cranial kinesis first evolved in the early bird lineage are very sketchy, mostly due to the scarcity of fossilized cranial material from the late Jurassic and early Cretaceous Periods, when birds were diversifying.

However, a new study of the exquisitely preserved skull of Yuanchuavis kompsosoura, an ancient bird that lived in the early Cretaceous period, some 120-million years ago, has now cast light on aspects of the evolution of cranial kinesis. Yuanchuavis was found in a geological deposit in Liaoning Province, northeastern China, along with other early birds, as well as feathered dinosaurs. Sadly, its skull had been squashed and flattened during the fossilization process, such that many of the delicate bones were not distinguishable.

Using high-resolution X-ray CT scanning, scientists from the Institute of Vertebrate Paleontology and Paleoanthropology of the Chinese Academy of Sciences (IVPP) in Beijing and the Field Museum of Natural History in Chicago were able to identify the many small bones of the skull and then reconstruct their arrangement digitally in 3-D. The results, published in the journal eLife, have revealed that birds retained key dinosaurian traits far into their evolution, for many millions of years after the split between dinosaurs and birds. However, the skull also provides clues about the possible origin of cranial kinesis, even though the characteristic movable joints were not yet present.

The ability to move the beak independently of the skull is a key characteristic of modern birds and is thought to improve feeing performance by increasing biting force, jaw closing speed, and food handling precision. The cranial kinesis is accomplished by two chains of skull bones aligned from the back of the skull to the front, with one chain along the cheek and the other along the palate (roof of the mouth). These chains of interconnected bones help to transfer forces from the back of the skull to the beak, allowing for its movement.

“We still don’t know which chain of bones was completed and freed first in bird evolution, or even if it was all completed together,” said study lead author Professor Wang Min. “What we see in dinosaurs and the earliest birds, like the enantiornithine Yuanchuavis, is that these chains are missing connections or are locked in place because they connected to more bones that would stop most movements.”

“This fossil actually helps to narrow the time when, and where on the bird family tree, components of that moveable beak or kinesis evolved. We can show that it definitely was not present any earlier in bird evolution,” said study co-author Professor Thomas Stidham.

The morphology of Yuanchuavis showed a mosaic of dinosaurian and bird traits, such as a feathered bird body with wings, a mouth with teeth, and an immovable dinosaurian palate and snout. Among the primitive dinosaurian features is the presence of a bar forming contacts between the bones of the temporal region of the skull, behind the eye. A similar structure is found in the skulls of dinosaurs, crocodiles, lizards, and some snakes (known as the diapsid condition). These interconnections essentially “lock up” one of the chains of bones in Yuanchuavis that is otherwise free in living birds, and is a requirement for kinesis.

The reconstruction of the pterygoid bone from the palate shows that it had no direct contact with another bone, called the quadrate, which is also needed to complete the palatal chain of bones in kinesis. That absence of contact is seen in most dinosaurs, including Triceratops and Tyrannosaurus, but the bones connect with one another in living birds, enabling the beak to move independently of the skull. In addition, the research team was able to confirm that the pterygoid of enantiornithines retained a unique shape. It had a two-pronged projection behind the eye, as in Velociraptor and other close dinosaurian relatives of birds.

Although these morphological features in the skull made it impossible for early birds to benefit from cranial kinesis, the paleontological team was able to uncover a secret hidden in the fossil skull regarding the possible origin of kinesis. Detailed analysis and comparison of the palatine, another bone in the palate of Yuanchuavis, shows that the palatine lacks a key contact with the jugal bone, a part of the cheekbone. Dinosaurs and the oldest bird Archaeopteryx have that contact, which helps stabilize the palate bones and restricts movement. In contrast, the palatine in Yuanchuavis and modern, living birds, does not have that contact, thus facilitating back and forth sliding during bird skull kinesis.

Professor Stidham pointed out that most people would expect early birds to have bird skulls that matched their feathered wings and bodies. “However, these early birds hadn’t completely moved beyond their dinosaurian ancestry, and the evolutionary path from a small feathered dinosaur to a living bird was not a straight line,” he said, noting that bird evolution had its “detours and dead-ends.”

The researchers conclude that the signature body plan of birds evolved bit by bit, over tens of millions of years, rather than in one burst of innovation. This may explain why the earliest birds, like Yuanchuavis, did not yet exhibit all the typical characteristics of birds, but retained some of the traits of their dinosaurian ancestors.