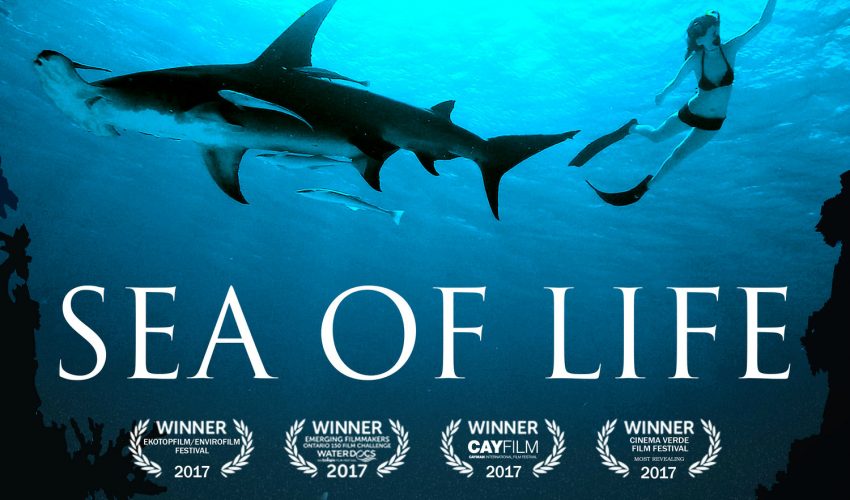 A groundbreaking new film exposes how human activities are pushing marine ecosystems to the point of no return. Filmmaker Julia Barnes captured underwater images all over the world to show that Earth’s oceans are in a state of emergency for the documentary Sea Of Life.

Barnes points out that the ocean is home to 80 percent of all life on the planet and it provides most of the oxygen that we need to survive. “It is the heart and lungs of our planet, and it is in trouble,” says Barnes.

50 percent of the world’s coral reefs have become a casualty of climate change, and they are predicted to go extinct. Barnes had difficulty finding a healthy coral reef to film, and so she turned to experts in Australia to find out why the “world’s most biologically diverse ecosystems” are vanishing.

Massive amounts of carbon dioxide absorbed by the ocean are causing significant changes in the water known as ocean acidification. According to the film, the chemistry of the ocean is changing 10 times faster than it has at any time in the last 50 million years. Since the beginning of the Industrial Revolution, the ocean has become 30 percent more acidic.

For as many as four decades, the oceans will continue to become more acidic from Co2 that has already been emitted. Rob Stewart, creator of the documentary Revolution which inspired Barnes’ mission, explains that we not only need to slow down carbon emissions but also pull existing carbon out of the atmosphere.

Marine life is suffering as a result of fishing pressure as well. The documentary states that all species of large fish have been depleted by 90 percent. Out of all the top predators in the ocean, 87 percent are in a state of decline, and over a third of these declining populations have collapsed.

Sea of Life reveals that bluefin tuna are down by 96 percent and are still being fished. Because they are so rare, there are tuna worth hundreds of thousands of dollars, and fishermen have become even more relentless to capture them.

Climate campaigners insist that industrialized fishing must be stopped. Many people also blame the livestock industry for contributing to the devastation of marine populations due to the fact that oceans are being strip-mined to feed non-human animals. Currently, more fish are consumed by pigs than by sharks.

“There’s this illusion still, it goes way back, that the ocean is so big and so vast that nothing we can do can harm it,” explains Dr. Sylvia Earle. She says that we are now seeing firsthand that “the ocean is not to big to fail, and if it does so do we.”

Many scientists believe that we are in the middle of Earth’s sixth mass extinction, which is an event where more than half of the planet’s species are lost. The current event is referred to as The Anthropocene, or the age of the humans, because it has been triggered by human activities. We will lose half of the species on Earth by 2100 at the current rate of industry.

Despite the bleak forecast, ocean conservationist Fabien Cousteau says that the story doesn’t have to end sadly. Cousteau suggests that if we give nature time to heal, new life can emerge. “Although the world of the oceans has changed quite drastically over the last few decades, it can change for the better over the next few decades,” says Cousteau.

Barnes also remains optimistic. “We have an opportunity right now to tackle the biggest problem the world has ever faced, and I think we are going to do it,” says Barnes. “Every living thing on Earth is in jeopardy, every species we love, every ecosystem we depend on. Now that we know what’s going on it is our duty not just to do something, but to do everything in our power to turn things around.”

Sea of Life is available to rent or buy now.