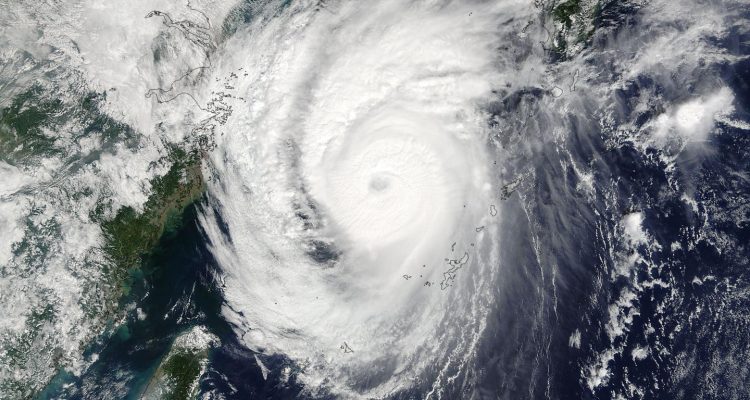 Byadmin
Earth.com staff writer
NASA satellite imagery showed that Typhoon Chaba’s eye had closed as the storm weakened between Oct. 3 and Oct. 4. NASA’s Aqua and Terra satellites passed over the Northwestern Pacific Ocean and captured infrared and visible imagery of the storm with the disappearing eye.

At NASA’s Jet Propulsion Laboratory in Pasadena, California, infrared data from the Atmospheric Infrared Sounder or AIRS instrument that flies aboard NASA’s Aqua satellite was made into a false-colored infrared image of Chaba. That data was captured on Oct. 3 at 12:41 a.m. EDT (04:41 UTC) and showed an eye in the Super Typhoon. Infrared data provide temperatures, and the AIRS image showed powerful storms with very cold cloud top temperatures in excess of minus 63 degrees Fahrenheit (minus 53 degrees Celsius).

On Oct. 3 at 10:20 p.m. EDT (Oct. 4 at 02:20 UTC) the MODIS Moderate Resolution Imaging Spectroradiometer instrument aboard NASA’s Terra satellite captured a visible-light image of Typhoon Chaba that showed the eye had become cloud-filled. The storm was weakening and in 13 hours the eye could not be seen. By 5 a.m. EDT (0900 UTC) on Oct. 4, the Joint Typhoon Warning Center noted that Chaba had dropped from super-typhoon to typhoon status.

At that time, Chaba’s eye was no longer visible. The JTWC noted “animated enhanced infrared satellite imagery depicts a rapidly deteriorating system with no longer any resemblance of an eye.”

Southwesterly vertical wind shear started to increase as Chaba gets closer to the westerly jet stream, and increased shear would weaken the system.

Chaba is forecast to turn northeast and move over the Sea of Japan while turning extra-tropical.