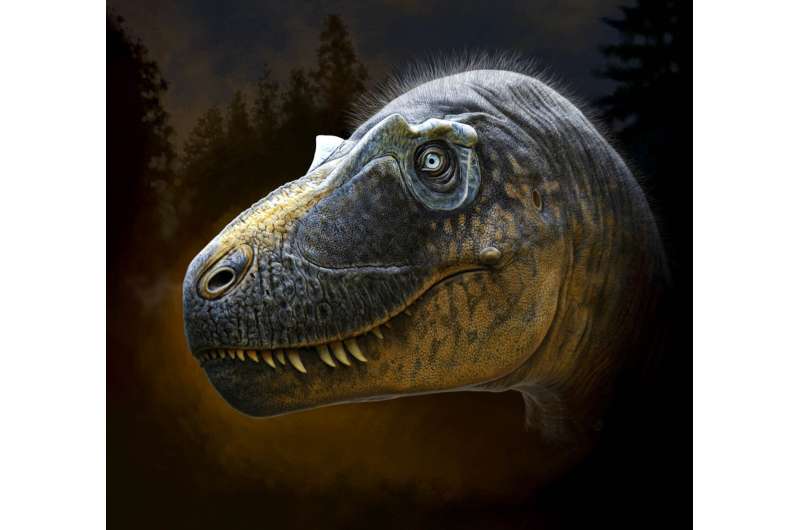 Although fossils of tyrannosaurids – the family of dinosaurs including the famous Tyrannosaurus Rex – have been discovered across North America and Asia since over a century, many details of their evolutionary history remain unclear. Since the 1990s, a significant amount of scientific debate has surrounded Daspletosaurus, a massive tyrannosaurid known from Montana and Alberta, which many researchers argued was the ancestor of T. Rex.

Reconstructing the evolutionary history of this group has been hampered by the rarity of good specimens, leading scientists to disagree as to whether these tyrannosaurids represent a single lineage evolving in place, or several closely related species which did not descend from one another.

Now, the discovery of a new species of Daspletosaurus in Montana in 2017 promises to shed more light on these issues. The new creature has been named Daspletosaurus wilsoni after John Wilson, who found the fossils in rocks that were intermediate in age between other tyrannosaurs from this region.

Daspletosaurus wilsoni displays a mixture of features of more primitive tyrannosaurs from older rocks, such as a prominent set of horns around the eyes, and features otherwise known from later members of the group (including T. Rex), like tall-eye sockets and expanded air-pockets in the skull. Thus, this species appears to be a “halfway point” or “missing link” between older and younger tyrannosaurid species.

These findings suggest that previous studies were correct in identifying several species of Daspletosaurus as a single evolving lineage, and support the descent of T. Rex from this group. Thus, the evolution of these dinosaurs appears to follow what scientists call an “anagenesis” mode of evolution, in which species form consecutive ladder-steps in a single evolutionary lineage in which one ancestral species evolved directly into a descendent species.

This type of evolution is contrasted to “cladogenesis,” where successive branching events produce many closely-related species which represent evolutionary “cousins” rather than ancestors and descendants. Therefore, linear evolution appears much more widespread in dinosaurs than previously thought, while branching evolution seems to be less frequent.

A detailed description of Daspletosaurus wilsoni and its evolutionary lineage is published in the journal PeerJ.