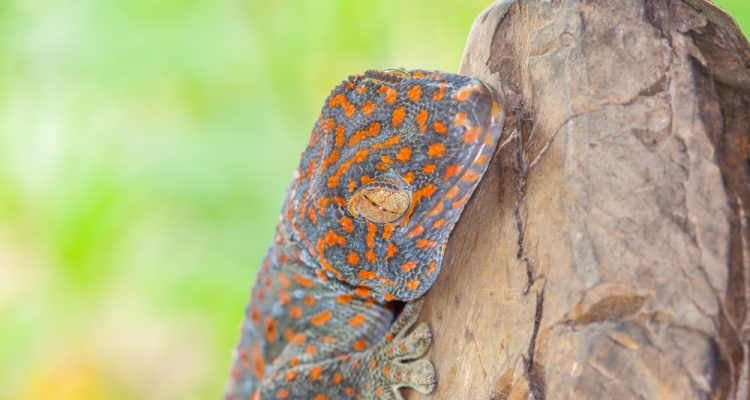 Snakes peel their skin off to grow larger. Humans get skin peels to look younger. When a fish-scale gecko sheds its scales, it’s not for growth or vanity – it’s a matter of survival. We’re all familiar with lizards who shed their tails and run away to escape predators. Fish scale geckos up the ante by shedding their scales when they’re grabbed. But a newly-discovered gecko species, the Geckolepis megalepis possesses the largest scales of any gecko.

The gecko’s scales are attached to a structure that tears away quite easily. This leaves would-be hunters disappointed when their prey disappears, leaving nothing but a sheath of scales as a memento.

While other geckos may also be able to lose scales when confronted with danger, Geckolepis are built to do so. They can eject their scales actively if they’re gently touched. Another factor that separates them from other gecko species? Geckolepis can grow their scales back quickly with no scarring. (Is it just us, or does that sound like a bizarre, gecko plastic surgery advertisement? “Totally non-invasive scale-shedding with little to no scarring!”)

A survival trait that’s a boon to fish-scale geckos is a problem for scientists who wish to study them. How do you catch and effectively study a gecko that blasts its skin off at the slightest provocation? The current, scientifically-approved method is highly technical and detailed and… All right. Scientists simply lure them into plastic bags to get a closer look.

The constant loss of their scales make Geckolepis a tricky species to study. Most geckos can be identified by their scale patterns, but those change as scales are lost and regrown, making fish-scale geckos “a nightmare to identify,” according to Mark D. Scherz of the Ludwig Maximilian University of Munich and Zoologische Staatssammlung München.

Scientists have begun using micro-CT scans to find identifying features on the skeletons of the captured geckos.

Findings from the new study were published in the journal PeerJ.