New species marked the transition between dinosaurs and birds • Earth.com 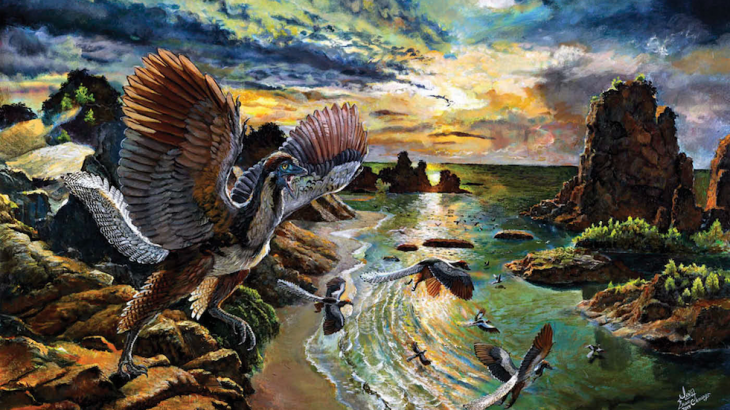 New species marked the transition between dinosaurs and birds

Scientists are describing a new species of the “first bird,” which they have named Archaeopteryx albersdoerferi. The study confirms that these creatures, which had teeth and clawed fingers, served as an evolutionary transition point between dinosaurs and birds.

Using synchrotron radiation X-ray microtomography, the researchers were able to virtually dissect the fossil and identify skeletal adaptations that would have enabled A. albersdoerferi to fly.

“Archaeopteryx albersdoerferi is one of the most important specimens of Archaeopteryx because it is around 400,000 years younger than any of the others found so far.”

“This is the first time that numerous bones and teeth of Archaeopteryx were viewed from all aspects including exposure of their inner structure. The use of synchrotron microtomography was the only way to study the specimen as it is heavily compressed with many fragmented bones partly or completely hidden in limestone.”

Study co-author Dr. John Nudds from Manchester University added, “Geochemical analysis of the rock encasing the bones implies this specimen came, unlike others, from the younger Mörnsheim Formation.”

The analysis revealed that A. albersdoerferi shares more features in common with modern birds than with dinosaurs.

The birdlike traits suggest that A. albersdoerferi may have had improved flying ability compared to older species of Archaeopteryx. The most notable of these avian traits were thin air-filled bones, an increased area for attachment of flight muscles on the wishbone, and a reinforced configuration of bones in the wrist and hand.

“Significantly, however, when we examined the evolutionary relationships of various species of Archaeopteryx we found that its flight-related characteristics had appeared separately from those of more advanced bird-line dinosaurs, implying that flying lifestyles have developed more than once,” said study co-author Dr. Benjamin Kear of Uppsala University.

The 150-million-year-old fossils of Archaeopteryx have been known since 1861, and a total of 12 specimens have been recovered to date. The fossil in this study, the “Daiting Specimen,” is one of the most mysterious.

The fossil was discovered in a quarry near Daiting in southern Germany in 1990, but has been held in private ownership until its purchase in 2009 by palaeontologist Raimund Albersdoerfer.