The best places to observe wild bats in the United States • Earth.com 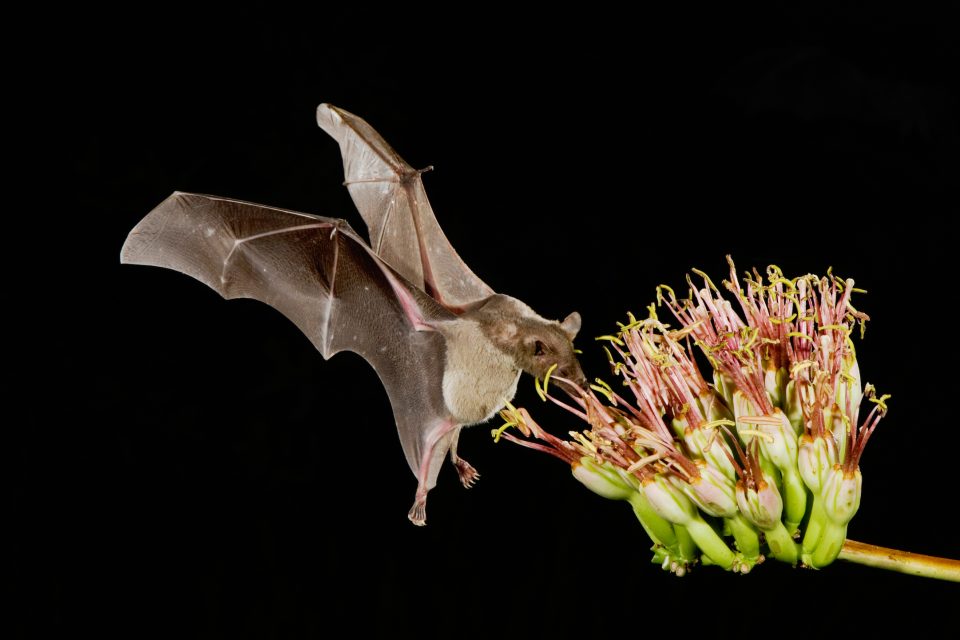 The best places to observe wild bats in the United States

The best places to observe wild bats in the United States. Of the flying animals, birds certainly get the most attention.  People set out food and housing for the feathered denizens of the sky.  Large non-profits and clubs are dedicated to watching birds for fun and to their conservation.  It seems that bird research, conservation, and management are – compared to work with other organisms- relatively well funded.  Bats, on the other hand, are the bad boys of the sky, skulking past the moon at night and connected to the literature and film of our darkest fears and desires.

Bats do have a lot in common with birds, as both are a pleasure to view and both can be attracted into a yard if things are arranged to suit their needs.  When I was conducting hummingbird research in Ecuador, I noticed something. If I left hummingbird feeders out into the evening, bats would visit them for the artificial nectar.  Depending on location, pollinator bats visit the United States as well.  If you already have hummingbird feeders hanging outside on a warm summer night in the southwestern part of the US, it might be worth watching it for nocturnal visitors.

According to the United States Department of Agriculture (USDA), two bats play an important role in pollinating the saguaro cactus and agave in the US.  The Lesser Long-nosed Bat (Leptonycteris curasoae yerbabuena) and the Mexican Long-tongued Bat (Choeronycteris mexicana) migrate from Mexico to Arizona, New Mexico, and Texas where they feed on plant nectar.

Mangos, bananas and guavas all depend on bats for pollination.  Planting flowers that these bats like may very well attract them to your yard, the bats also sometimes eat insects found on plants, helping the plant out in another way.  According to the USDA, flowers bats visit tend to be white, green or purple, emit strong odors, and are open at night. Bats Live suggests planting evening primrose, Phlox and other night blooming plants to attract pollinating bats.  These bats pollinate much of the native plant life of the desert southwest, keeping cacti and the animals and plants dependent on them healthy.  However, the majority of bats in the US eat insects. Like birds, different bats occupy different niches in different environments and many even migrate depending on the season.

The main difference between birds and bats, for the casual observer, is that it is inevitably harder to view bats that are small and nocturnal compared to many birds that can be brightly colored and active during the day.  Bats like their feathery, diurnal neighbors fill the night with noises, just not always noises human ears can easily pick up.

Besides communication, bats also vocalizations to navigate in the dark.  Different bat species emit echolocation clicks at different frequencies, and because of this, bat researchers can use recordings to tease out how many bats of what species are in an area.  Sophisticated software analyzes high frequency recordings, reliably identifying bats. There are now apps combined with special speakers for sale that can be used to turn smartphones and tablets into bat detecting and identifying devices.

Since the technology is relatively new, it can be pricey. Echo Meter Touch, a bat detector for phones and tablets, costs $179 for the recreational version and $349 for the professional.  Much less expensive kits that allow you to make a less sophisticated bat detector sell on Amazon for around $30.  Simple detectors usually just convert the bat’s ultrasonic noises into a frequency the human ear can hear, giving you the joy of ‘hearing’ bat echolocation without knowing what species is making the noise.  Besides observing the quiet lives of bats flitting around everyone’s neighborhood, there are also a few places to visit known for their spectacular abundance of bats.

Austin, Texas, is a place with a famous colony of bats.  According to Free Fun in Austin, 1.5 million Mexican Free-tailed bats (Tadarida brasiliensis) roost under the Ann W. Richards Congress Avenue Bridge, claiming to be the largest urban colony of bats in the world.  The Mexican Free-tailed bats are claimed to have the fastest horizontal speed of any animal (as opposed to the diving speed of animals like the peregrine falcon) flying as fast as 60 mph, according to batcon.org.  At night in the summer, tourists flock to this bridge to watch the speeding flurry of wings as the bats leave their day time sleeping areas to hunt for insects.  Boat tours pass under the bridge allowing good views of the bats and kayaks and can be rented to explore the bat bridge on your own.

Bracken Cave, not far from downtown San Antonio, Texas, is home to an even larger colony of bats.  With a population of more than 15 million Mexican Free-tailed bats, it’s one of the larger colonies.  Bat Conservation International now owns Bracken Cave, protecting it from development and allowing visitors to see the spectacular eruptive emergence of bats on summer nights.  As in Austin, Bracken Cave is a maternity colony, a place where female bats have their pups. In June, the mother bat will give birth to one pup, by mid-August the baby bats can fly, which is when you see the largest number of bats flying out of their resting spots.

Texas might bring a large number of tourists, but it’s not the only place to see bats.  Carlsbad Caverns is home to an impressive subterranean national park in New Mexico.  The National Park Service runs a bat flight program at Carlsbad that starts on May 25 and runs into October.  Although Carlsbad Caverns is home to 17 species of bats, it’s the Mexican Free-tailed Bats that again live in such spectacular numbers.

Tucson, Arizona has its own bat bridges, as do many lesser known towns in the American Southwest.  According to the Pima County Library, a colony under Pantano Wash Bridge was estimated to have a population of 20,000 Mexican Free-tailed bats.  Mammoth Cave National Park in Kentucky hosts a celebration of national bat night on August 31.  According to Bat Conservation International, visitors are also drawn to see bats in Africa, Australia, Asia and Europe.  If none of these places are within your means to visit and you don’t have a green thumb, it’s always possible to build a bat house and see who takes up residence.  I’ve even seen bats living in numbers even in Alaska in an abandoned building.