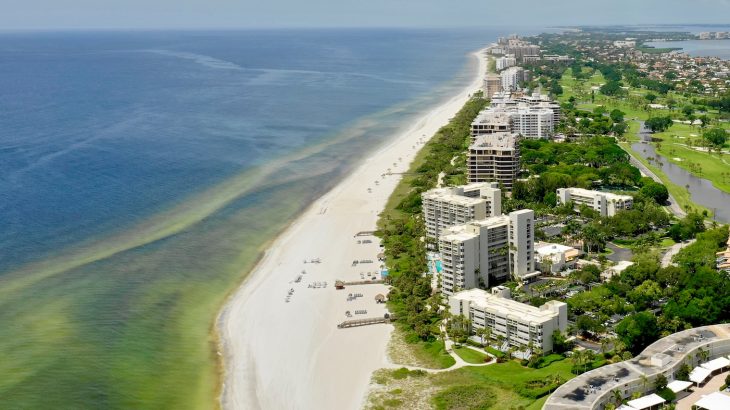 Ocean circulation affected offshore nutrient levels, the marine scientists say in their study, published in the Journal of Geophysical Research-Oceans. High offshore nutrient levels in the spring, caused by the upwelling of deeper ocean waters, help to quell the red tide bloom in the fall. However, the upwelling did not happen in winter or spring of 2018, therefore, the bloom was allowed to grow along the coastline that same summer. At the end of July, an upwelling circulation set in and carried the bloom to the coastline along the bottom, dredging up previous algae from 2017.

Some of the new bloom was carried to the Florida Panhandle on the back of Tropical Storm Gordon. When Gordon subsided, the bloom was then picked back up by the upwelling circulation and brought to the Florida coast by the Gulf Stream.

“This further demonstrates that the ocean circulation is the major determinant of Florida’s, Karenia brevis harmful algae blooms, dispelling the myth that land-based fertilizers are to blame,” said Robert Weisberg, PhD, a USF Distinguished Professor of Physical Oceanography. “While pollutants can exasperate an existing red tide, they are not the root cause.”

Weisberg and his team also worked with the Florida Fish and Wildlife Conservation Commission (FWC) to deploy an autonomous underwater glider to track upwelling circulation. During its month-long mission, the glider also tracked high levels of chlorophyll and low levels of oxygen near the sea floor. Using the glider, the team could also pinpoint the source for all three red tide blooms off the Florida coast as ome 30 to 50 miles north of Tampa Bay to Sarasota Bay.

It’s currently too soon to predict what the red tide situation will be like for summer 2019, despite the team picking up low concentrations of  Karenia brevis offshore. The researchers will get a better idea on how severe this year’s red tide will be come mid-June.