How a peacock may use its flashy feathers to evade predators • Earth.com 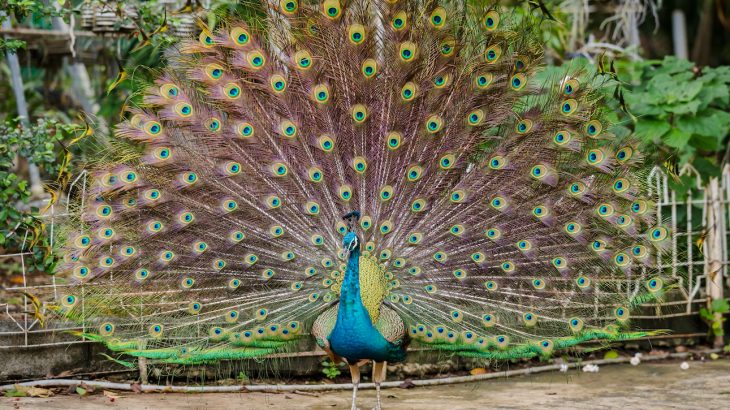 How a peacock may use its flashy feathers to evade predators

A new study has found that the flashy feathers which make peacocks so noticeable to one another may actually help them to hide from predators in the wild. According to the experts, many of the animals that pose the biggest threats to peacocks lack the color vision to detect the brilliant colors of the tail feathers.

The research team pointed out that while a peacock’s feathers would dramatically stand out to humans, large cats and stray dogs only have two color receptors, which would make the feathers blend into the natural surroundings.

“Feathers perceived by humans to be vividly colorful are often presumed to be equally conspicuous to other mammals, and thus to present an enhanced predation risk,” wrote the researchers.

“However, many mammals that prey on adult birds have dichromatic visual systems with only two types of color-sensitive visual receptors (one sensitive to ultraviolet light), rather than the three characteristic of humans and four of most birds.”

This means that a male peacock could show off its tail feathers for mating purposes without getting the attention of predators.

The study was focused on how peacock tail feathers would appear to predators and to other peacocks. The team also used multispectral imaging and reflectance spectroscopy to compare the appearance of color against green vegetation.

The investigation confirmed that the feathers would look very different to mammals than to other peacocks.

“When viewed by tetrachromatic birds against a background of green vegetation, most of the feathers studied had color and brightness contrasts similar to values previously found for ripe fruit,” wrote the study authors.

“By contrast, when viewed by dichromat mammalian predators, the color and brightness contrasts of these feathers were only weakly detectable and often did not reach detection thresholds for typical viewing distances.”

The study is published online at bioRxiv.org.