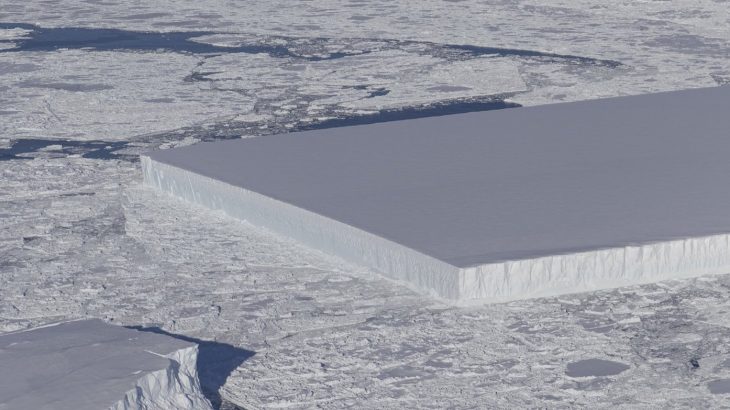 During a recent NASA Operation IceBridge Flight over Antarctica, scientists captured an image of a mysterious, perfectly-rectangular iceberg measuring a mile in width.

The missions of Operation IceBridge is to provide three-dimensional images of the Arctic and Antarctic ice sheets, ice shelves, and sea ice. When completed, it will be the largest polar ice survey ever conducted by flight and will provide a more thorough picture of the world’s polar ice.

The rectangular iceberg was spotted by NASA scientists near the Larsen C Ice Shelf, the same shelf where earlier this summer an iceberg the size of Delaware, A68, broke free from the shelf.

Measuring about a mile wide, the rectangular iceberg looks nothing like the typical icebergs we imagine with jagged edges and peaks.

NASA called the phenomenon a tabular iceberg, which is it why it has such a smooth, rectangular shape.

“A tabular iceberg can be seen on the right, floating among sea ice just off of the Larsen C ice shelf,” NASA ICE tweeted on October 17th. “The iceberg’s sharp angles and flat surface indicate that it probably recently calved from the ice shelf.”

Kelly Brunt, A NASA scientist, spoke with LiveScience about tabular icebergs and explained that they are wide, flat and long and due to its size could easily break apart at any moment.

Researchers have been keeping a close eye on A68, and in September of this year, it was reported that the iceberg started to spin and will soon collide with the ice shelf it came from.