The movement of other planets has impacted Earth’s climate • Earth.com 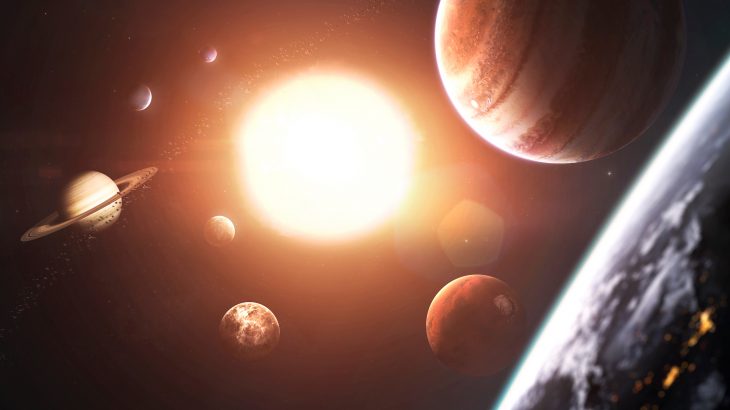 The movement of other planets has impacted Earth’s climate

The amount of Sun that reaches the Earth’s surface fluctuates due to cyclic changes in how the planet spins on its axis and the shape of its orbit. For years, scientists have speculated that major shifts in our climate are driven by these fluctuations. The lengths of planetary cycles, however, are inconsistent and difficult to predict, which has made it challenging for experts to pinpoint what caused ancient climate shifts.

Up until now, researchers had only tracked the movement of planets back to about 60 million years ago. However, a new study led by geologist and paleontologist Paul Olsen of Columbia University has extended this record by 140 million years. The research was based on periodic changes in ancient sediments drilled from Arizona and New Jersey.

Last year, Olsen’s team identified a 405,000-year cycle in Earth’s orbit that apparently has not changed at all in the last 200 million years. Using the same rock cores for the current study, the experts identified a cycle that once lasted 1.75 million years, but currently persists for 2.4 million years. According to the experts, knowing the length of the planetary cycle helps them to interpret long-term changes in the paths of Jupiter, Mercury, Venus, and Mars – the planetary movement that is most likely to impact the Earth.

“With two major coring experiments to date, we’ve we learned that changes in tropical climates from wet to dry during the time of early dinosaurs, from about 252 to 199 million years ago, were paced by orbital cycles lasting about 20,000, 100,000 and 400,000 years. On top of that is a much longer cycle of about 1.75 million years,” explained Olsen.

“The shorter cycles are about the same today, but the 1.75 million year cycle is way off – it’s 2.4 million years today. We think the difference is caused by a gravitational dance between Earth and Mars. This difference is the fingerprint of solar system chaos. No existing set of models or calculations precisely duplicates these data.”

Olsen wants to use sediments to develop a record of climatic changes on Earth that will inform the creation of a map of solar system movement over hundreds of millions of years. Olsen refers to this record as a “Geological Orrery,” which he says would offer new insight into our own climate and also into the evolution of the solar system itself.

“The Geological Orrery is the opposite of an equation or model. It’s designed to provide a precise and accurate history of the solar system. We get that history right here on Earth, from the history of our climates, which is recorded in the geological record, especially in large, long-lived lakes,” said Olsen. “Earth’s orbit and axis orientation are constantly changing because they are being deformed by the gravitational attractions of other bodies. These changes affect the distribution of sunlight hitting our surface, which in turn affects climate, and the kinds of sediments that are deposited. That gives us the geological record of solar system behavior.”

Olsen pointed out that what is new about his research is the systematic approach of taking rock cores that date back tens of millions of years, looking at the sedimentary record of climate, and accurately dating those changes over multiple sites.

“That allows us to capture the full range of solar system-driven deformations of our orbit and axis over long time periods,” Olsen said.

Olsen also explained how his work is relevant to the climatic changes we are experiencing today.

“In addition to the way climate is tuned to our orbit, it’s also affected by the amount of carbon dioxide in the air. Now we’re heading into a time when CO2 levels may be as high as they were 200 million years ago, early dinosaur times. This gives us a potential way to see how all the factors interact. It also has resonance with our search for life on Mars, or for habitable exoplanets.”