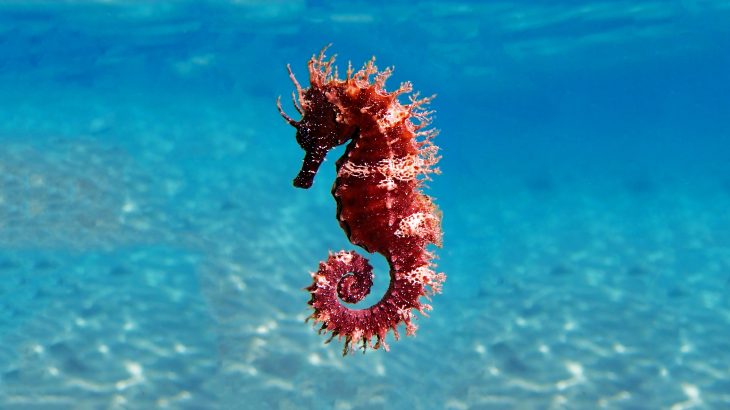 In a new study from the University of Sydney, researchers have discovered that male seahorses transport energy-rich fats and other nutrients to their developing babies.

While it was known that pregnant male seahorses can carry as many as 2,000 eggs at a time, it has not been entirely clear how they actually feed the babies.

Seahorses and their close relatives, including seadragons and pipefish, are the only male animals in the world that get pregnant and give birth to their offspring. Until they hatch and develop, the babies are protected inside of a brood pouch.

“This work adds to the growing evidence that male pregnancy in seahorses could be as complex as female pregnancy in other animals, including ourselves,” said study co-author Dr. Camilla Whittington.

“We now know that seahorse dads can transport nutrients to the babies during pregnancy, and we think they do this via a placenta. It’s not exactly like a human placenta though – they don’t have an umbilical cord, for example. We need to do further histological work to confirm this.”

According to Dr. Whittington, seahorses are emerging as important model species for understanding the evolution of live-bearing reproduction.

“We can draw some parallels between seahorse pregnancy and human pregnancy.”

“Seahorse dads seem to do some of the same things that human mums do, including transporting nutrients and oxygen to developing embryos, and immune modulation to protect the babies from infection.”

The study provides the first conclusive evidence that male seahorses transport nutrients to developing embryos, which is a phenomenon known as “patrotrophy.”

The findings raise new questions, such as whether seahorse embryos can influence how much nutrition they receive while they are still in the brood pouch.

“My team is using a range of techniques to investigate the biology of seahorse pregnancy,” said Dr. Whittington. “We want to understand more about the seahorse pouch and the ways it protects and supports the baby seahorses.”

Study lead author Zoe Skalkos said the research is really exciting because it’s a big step in understanding the relationship between dad and baby in male pregnancy.

The study is published in the journal Journal of Comparative Physiology B.