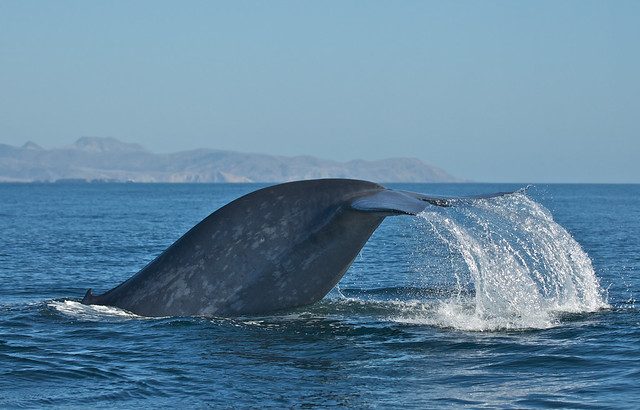 Scientists at the Oregon State University Marine Mammal Institute have used a statistical model to predict the feeding behavior of blue whales in the California Current Ecosystem. The research will provide new insight that could help protect the endangered blue whales.

The model used by the team combines long-term satellite tracking of the population’s movements with environmental data such as ocean temperatures. This gives experts a larger ecosystem view to help them understand how threats such as climate change and ship strikes may affect the whales over time.

“Most management decisions up to now have been based on locations where the whales tend to be found,” said study lead author Daniel Palacios. “But it’s not just where the whales are, but also the activity – are they actually eating there or simply moving through – that matters. This model can tell us which areas are the most important for actual foraging.”

Blue whales grow up to 90 feet in length and weigh up to 300,000 pounds, yet they feed primarily on tiny shrimp-like krill that are less than two inches long. It is estimated that 1,600 of the world’s 10,000 blue whales, known as the North Pacific population, spend the summer and fall off the western coast of the United States.

The California Current Ecosystem stretches from Baja California up to the Canadian border. Along this stretch, steady winds in the spring and summer seasons promote a rich and productive marine community. The study was focused on the relationship between the whales’ feeding behavior and the ocean conditions during the feeding season in this particular region.

The researchers found that blue whales were more likely to forage in areas that are known for hosting large whale aggregations.

“The same environmental parameters – water temperature, depth, abundance of phytoplankton – that drive hotspots of whale aggregation also drive where foraging behavior is more likely to occur,” said Palacios. “While this was not necessarily surprising, it was good to be able to demonstrate that we can predict whale behavioral states, as this helps inform management in terms of not just what areas are used more often by the whales, but also what they do once they get there.”

The study also revealed that whales were less likely to exhibit foraging behavior in waters that were further away from the coastline. A few locations along the coast where krill are the most abundant were found to be hotspots.

A couple of these prime foraging locations are located in areas of intense commercial shipping traffic near Los Angeles and San Francisco, which is significant because blue whale mortality due to ship strikes is a growing concern.

“If there are some areas along the coast that are more biologically important for the whales, based on intensified foraging activity, that’s important for management agencies to know, compared to areas where the whales are just passing through,” said Palacios.