Pterodactyls were the only vertebrates who could fly from birth • Earth.com 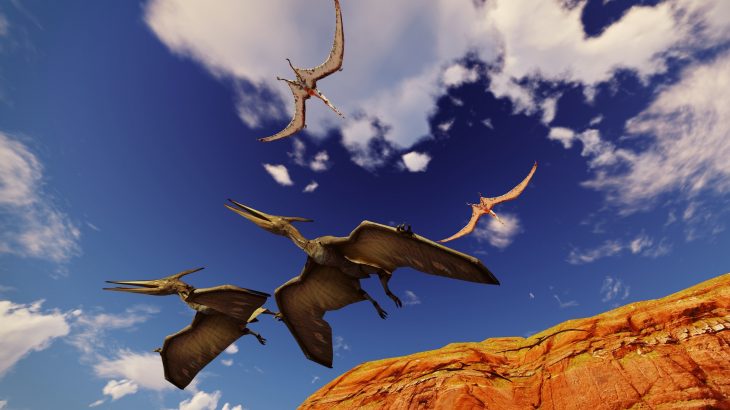 Pterodactyls were the only vertebrates who could fly from birth

Researchers at the University of Leicester have discovered that pterodactyls were able to fly from the time they were born. This remarkable finding is significant in that no other vertebrate in history has had this ability at birth.

Until now, it was believed that pterodactyls could not take flight until they were almost fully grown, like bats and birds. Evidence for this theory was provided by fossilized embryos of pterodactyls found in China with poorly developed wings.

Dr. David Unwin, a paleobiologist who specializes in the study of pterodactyls, teamed up with zoologist Dr. Charles Deeming of the University of Lincoln to investigate. The experts compared the pterodactyl embryos with data on prenatal growth in birds and crocodiles. They determined that these particular specimens were still at an early stage of development.

Based on more advanced embryos from China and Argentina that died just before they hatched, the researchers were able to conclude that pterodactyls had the ability to fly from birth. “Theoretically what pterosaurs did, growing and flying, is impossible, but they didn’t know this, so they did it anyway,” said Dr. Unwin.

Unlike baby birds or bats, pterodactyls had no parental care and had to look after themselves from birth. The ability to fly gave them a strong defense against carnivorous dinosaurs. However, many pterodactyls died at a very young age as a result of the dangers associated with flying.

The fact that pterodactyls could fly throughout their entire lives provides a possible explanation for how they were able to reach enormous wingspans that ranged from about 10 to 30 feet. Further research is needed to fully understand how the extinct reptiles managed to fly and grow at the same time.