Rabbits prefer eating plants that are packed with DNA • Earth.com 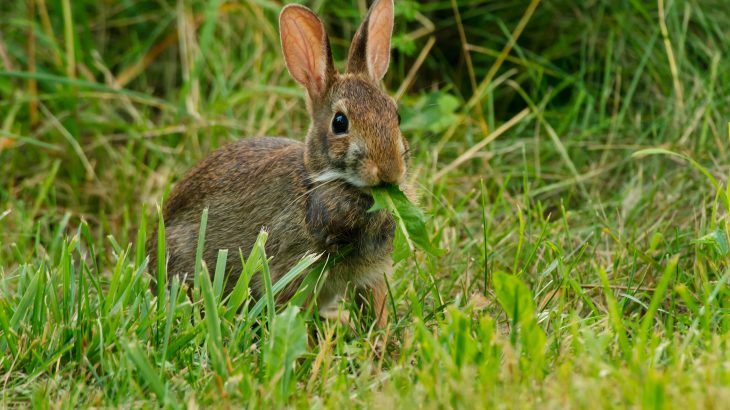 Rabbits prefer eating plants that are packed with DNA

Many factors influence the plants that rabbits and other herbivores eat such as availability, abundance, and nutritional value.

But now, researchers from Queen Mary University of London and the Royal Botanic Gardens Kew have found that genome size also plays a role in herbivore food preferences.

The study, published in the journal Proceedings of the Royal Society B, is the first of its kind to identify how genome size and the amount of DNA in a plant’s cells influences the diet of herbivores like rabbits.

The researchers say that genome size should be included in ecological models to project how climate change and urban sprawl will impact both plant communities and the animals that eat them.

The researchers surveyed grassland that was exclusively home to herbivores for the past eight years near London and analyzed plots that rabbits and invertebrates like snails and insects grazed on.

Depending on the herbivore, the plants responded differently in the plots, and the researchers found that rabbits prefer plants packed with DNA while invertebrates seem to be specialists that prefer plants with smaller genomes.

“We demonstrate that genome size plays a role in influencing plant-herbivore interactions, and suggest the inclusion of genome size in ecological models has the potential to expand our understanding of plant productivity and community ecology under nutrient and herbivore stress,” said Andrew Leitch, the joint-lead author of the study.

The reason rabbits prefer plants with larger genomes is because the plants have more nutritional value, according to the researchers.

The study not only shows which plants herbivores prefer but also how plants respond and recover after being eaten.

Genome sizes in plants dictate where the plants can thrive, and genomes are incredibly varied among plants. Understanding that plant DNA levels influence herbivore preferences is just another way to better monitor and study ecosystems.

“We argue that genome size needs to be considered in ecological models that are describing ecological processes,” said Dr. Ilia Leitch, a co-author of the study. “The functionality of these ecological models is essential if we are to establish good policy to mitigate against the negative effects of climate change, changing land use, eutrophication of our environment and to conserve our endangered species.”