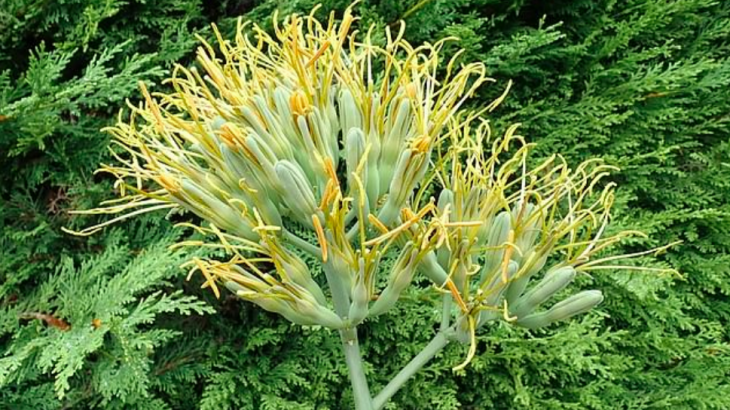 Experts at the Cambridge University Botanic Garden have finally gotten to see a giant agave plant bloom after waiting for 57 years. The rare “tequila plant” grew as much as four inches per day over the summer and is now nearly 15 feet tall.

The much-anticipated buds started to appear on the plant in June, but the yellow flowers did not blossom until earlier this week. By the time the massive plant stopped growing, staff members were preparing for it to bust through the roof of the greenhouse.

The mysterious plant, which is related to a family of plants used to make tequila, has been growing since 1962. The appearance of yellow stalk-like flowers allowed botanists to finally identify it as likely belonging to the Agave vivipara species.

Because it is part of the Asparagus family, the plant initially looked very similar to an asparagus spear until the flower branches emerged. Dr. Ángela Cano, who is the assistant curator at the gardens, will be able to confirm its identity as Agave vivipara when the plant produces fruits.

The flower contains both male and female parts that will allow it to self-pollinate. “That’s why the species is called vivipara, which means that it bears its own babies like mammals,” said Dr. Cano.

Monocarpic plants such as agaves only flower once, set seeds, and then die. The staff members predict their plant will remain in bloom for about a month before dying.

“The bottom section of the flower structure, or inflorescence, has started to flower, however its flowers may not look as pretty as people might expect as there aren’t any colored petals,” said Dr. Gano.

“In the wild, pollinators are attracted by the massive inflorescence (flower structure), the yellow color of the stamens, the smell of the flowers – broccoli-like – and the abundant nectar they produce.”