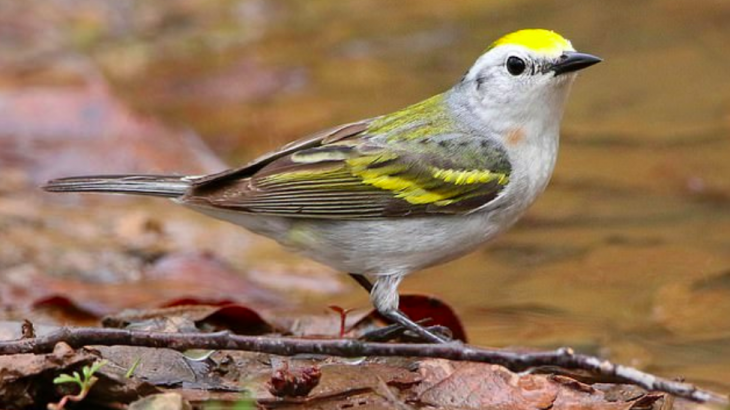 Lowell Burket, a regular contributor to the birdwatching website eBird, was enjoying his usual bird watching past time in his backyard in Pennsylvania when he spotted something highly unusual.

Burkett noticed that there was a warbler bird near his home that sounded like Chestnut-sided Warbler but had the physical characteristics of a Blue-winged and Golden-winged Warbler.

After several more spottings, Burket recorded a video of the bird and sent it to the Cornell Lab of Ornithology.

A week later, Cornell researcher David Toews went to take samples from the bird to see what exactly the warbler was a hybrid of.

Genetic analysis revealed that the bird was a hybrid of three different warbler species.

“We looked at the genes that code for different warbler colors,” Toews told the Cornell Chronicle. “This way we could re-create what the hybrid’s mother would have looked like – the avian equivalent of a detective’s facial composite, but generated from genes. We confirmed that the mother would have looked like a Brewster’s warbler and the father was a chestnut-sided warbler.”

Toews published his findings in the study in the journal Biology Letters.

The bird could have been the result of a small mating pool, and so the hybridization was a matter of necessity.

“That this hybridization occurred within a population of golden-winged warblers in significant decline suggests that females may be making the best of a bad situation,” said Toews. “It also tells us that wood-warblers in general have remained genetically compatible long after they evolved major differences in appearance.”

Researchers will continue to monitor the new hybrid to see if his genetic mix will hinder potential mates or if the male will go on to reproduce.