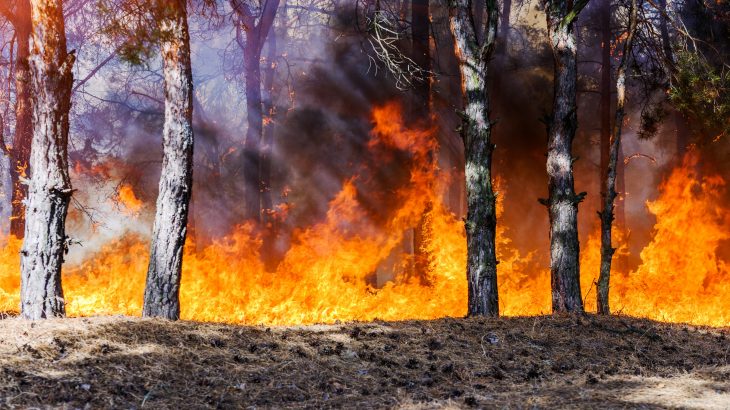 Forest ecosystems that are prone to wildfires are losing their capacity to store carbon,  according to a new study from the University of Cambridge. The team analyzed ten years of data and found that repeated fires are driving long-term changes to tree communities and causing population declines.

The study revealed that savannah ecosystems and regions with extreme wet or dry conditions are the most sensitive to changes in fire frequency. On the other hand, trees in regions with moderate climates are more resistant. Repeated fires were also found to cause less damage to trees with protective features such as thicker bark.

The experts determined that the impact of a single fire is very different from the effects of repeated fires over several decades. The researchers found that after 50 years, regions with the most extreme annual fires had 72 percent less wood and 63 percent fewer trees compared to areas that had not burned.

These types of changes to a forest community can reduce the forest’s long-term ability to store carbon.

“Planting trees in areas where trees grow rapidly is widely promoted as a way to mitigate climate change. But to be sustainable, plans must consider the possibility of changes in fire frequency and intensity over the longer term,” said study first author Dr. Adam Pellegrini.

“Our study shows that although wetter regions are better for tree growth, they’re also more vulnerable to fire. That will influence the areas we should manage to try and mitigate climate change.”

Previous studies have established that repeated fires reduce levels of soil nutrients such as nitrogen. In the current study, the experts report that lower nutrient availability promotes slower-growing tree species that have adaptations to help them survive with less nutrients.

However, tree that grow more slowly limit nutrient cycling in the soil. This decreases the ability of a forest to recover after wildfires, which burn five percent of the Earth’s surface every year. The carbon dioxide that is released is equivalent to 20 percent of annual fossil fuel emissions.

The majority of the CO2 emitted during wildfires used to be recaptured as trees bounced back, but repeated fires do not always allow time for this process.

“As fire frequency and intensity increases because of climate change, the structure and functioning of forest ecosystems are going to change in so many ways because of changes in tree composition,” said Dr. Pellegrini.

“More fire-tolerant tree species are generally slower growing, reducing the productivity of the forest. As climate change causes wildfires to become more intense and droughts more severe, it could hamper the ability of forests to recover – reducing their capacity for carbon storage.”