Even Earth’s most resilient lizards may succumb to climate change • Earth.com 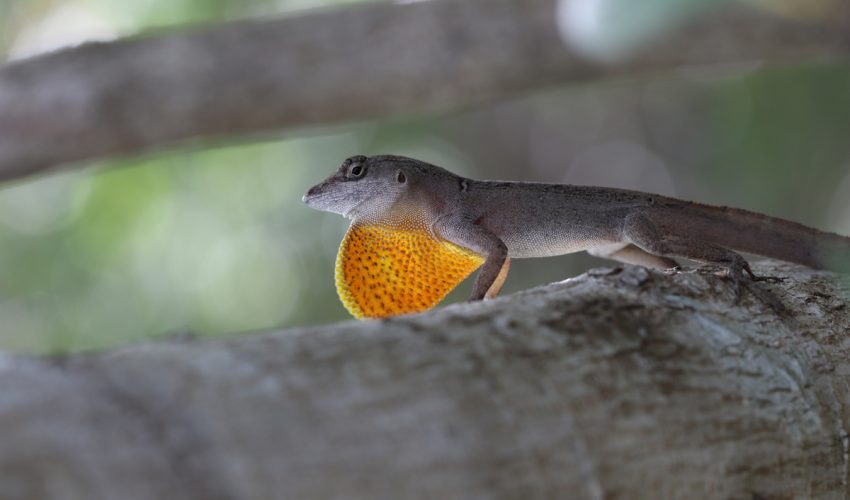 Even Earth’s most resilient lizards may succumb to climate change

The Bahamian anole lizard is a popular exotic pet, and its knack for escaping captivity has allowed anole populations to pop up throughout the Western Hemisphere. With its ability to live within such a large geographic range – not to mention its abilities as an escape artist – it seems like the anole would be equipped to adapt and thrive in a changing climate. However, a new study published in Proceedings of the Royal Society B has found that the opposite could be true.

Michael Logan, a post-doctoral fellow at the Smithsonian Tropical Research Institute in Panama, studies the brown anole throughout its home range in the Bahamas. In his most recent study, he found that the anole’s genetic makeup is shockingly ill suited for future climate scenarios. His results have led him to believe that the anole is unlikely to adapt quickly enough in order to keep pace with the current rate of environmental change.

“Brown anoles have huge population sizes and therefore should have loads of genetic variation in most traits, permitting rapid adaptation,” says Logan. “Instead, we found that genetic variation in several traits that are critical under climate change is basically zero.”

Like all lizards, brown anoles are ectotherms, meaning they rely on the temperature of their environment in order to control their body heat. In this study, Logan and his colleagues captures brown anoles from two distinct, isolated habitats in the Bahamas. One is relatively cool and forested, while the other is a hot, sunny peninsula. Under laboratory conditions, they raised hundreds of offspring from the two populations, and then tested them in certain experiments once they reached adulthood.

The researchers used gel packs and heating lamps to create an environment ranging from 20°C to 48°C, and recorded where the lizards moved and how they adjusted to temperature changes. They also ran a series of analyses to better understand the offspring’s inherited traits and their potential to evolve.

Their results were surprising, especially since the lizards they originally found had been from different, isolated populations in contrasting environments. The researchers did find evidence that populations were adapted to their local environments, but genetic results indicated that the lizards had little built-in capacity to inherit traits that would allow them to evolve with climate change. The author’s note that one possible explanation for this is that strong selection pressure in the past – which caused them to adapt to different environments in the first place, eliminated future genetic variation.

This research has important implications for the future of other ectotherms as well. “If genetic variation in thermal traits is rock bottom for a species like the brown anole that has huge population sizes and a super-wide geographic distribution,” ponders Logan, “what will it be for most other species that typically have much smaller population sizes and live relatively isolated, specialized lifestyles?”