Ring of fire eclipse will light up the morning sky • Earth.com 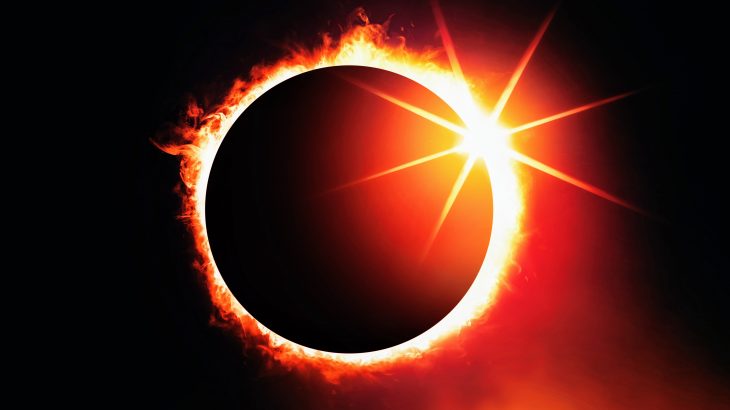 Ring of fire eclipse will light up the morning sky

Tomorrow morning, a ring of fire eclipse will put on a dazzling show across Earth’s northern regions, including Russia and Canada.

Meanwhile, a partial solar eclipse can be viewed in parts of the United States and the UK. In the U.S., astronomers say this rare eclipse will be visible up the Atlantic coast.

Skygazers will see a blacked out Sun surrounded by a “ring of fire” beginning at 05:10 ET. This means that for many people, the eclipse will coincide with sunrise.

According to Space.com, the rising sun will appear slightly dented, crescent shaped, or even ring shaped, depending on where you are.

A ring of fire eclipse occurs when the Moon is too far away to completely block out the Sun, leaving a blazing ring of light, or annulus, exposed. This is known as an annular eclipse.

Experts report that about 30 percent of the Sun will appear to be blacked out in Scotland, 20 percent in southern England, and as much as 70 percent will be blocked over the eastern United States.

“From the UK, the annular solar eclipse will be a partial eclipse, meaning that we’ll only see the Moon pass in front of a small part of the Sun,” said Dr. Emily Drabek-Maunder, an astronomer at the Royal Observatory Greenwich.

She noted that looking directly at the Sun, even during a partial eclipse, can cause permanent damage to the eyes. “Never look at the Sun directly or use standard sunglasses, it can cause serious harm to your eyes. “

NASA advises that if you do not have solar viewing or eclipse glasses, you can use an alternate method, such as a pinhole projector.

“You can make a projector by poking a small hole into a piece of card,” said Dr Drabek-Maunder. “You will be able to see the shape of the Sun projected on to the piece of paper and watch its shape change as the Moon passes in front of the Sun.”

The most optimal view of the ring of fire will be in the small town of Qaanaaq in Northwest Greenland.

In the Northeastern United States, look north just after sunrise to spot the Moon taking a bite out of the Sun as it rises over the horizon. According to Forbes, a small stretch of coast in New Jersey and New York will see “red devil horns,” also known as the crescent sun.

To learn when the eclipse may be visible in your area, check out this interactive map from NASA’s Scientific Visualization Studio.