Snakes in the snow: The resilience of the rubber boa • Earth.com 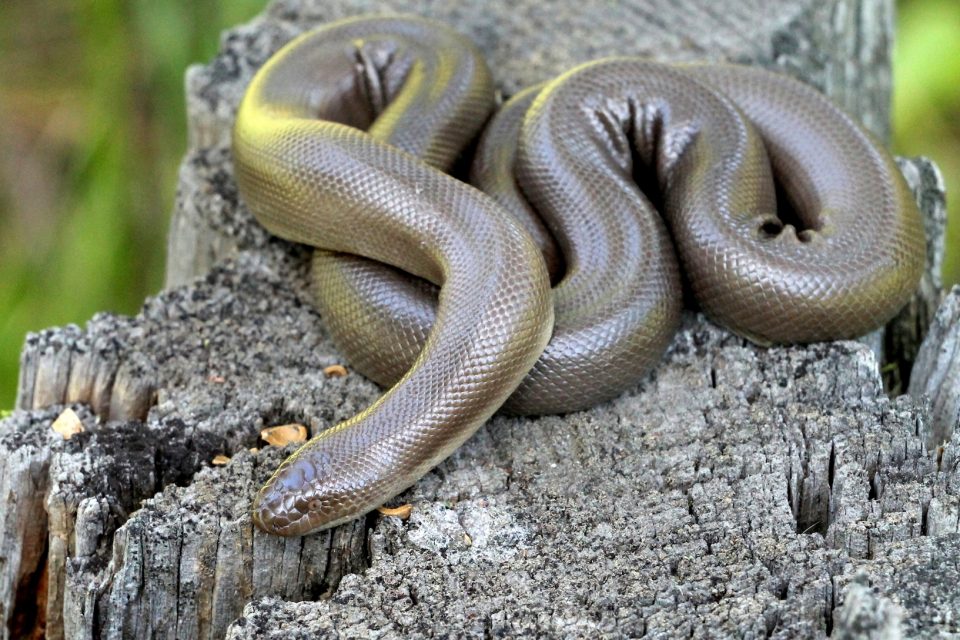 Snakes in the snow: The resilience of the rubber boa

“Trust in me, just in me…” croons Kaa, the Indian python (Python molurus) in the Disney adaptation of Rudyard Kipling’s The Jungle Book as he hypnotizes poor man cub Mowgli and prepares to ingest him. The Kaa of Kipling’s original tale is far more benevolent than his screen incarnation, helping the hapless human child escape from a number of scrapes with other creatures of the Indian jungle in an inversion of the perception of the snake as a dead-eyed predator. Let’s be honest though: in this rare instance, Disney’s version is probably more accurate… pythons have in fact eaten humans.

Kipling’s Kaa more closely resembles one of North America’s two boa species—namely, the charmingly docile rubber boa (Charina bottae), who is more likely to curl lightly around your wrist than to squeeze the life out of you. Incidentally, pythons like Kaa were once considered to be part of the Boidae, the family containing the boas and anacondas. However, more recent research has demonstrated that they belong to separate families, and, due to similarities in habitat and habit, evolutionarily converged, resulting in remarkably similar appearances and adaptations.

The rubber boa is not nearly so large as Kaa and his brethren, with the larger females topping out at a bit under two feet. They lack the sinuous grace of their Asian and African cousins in the Pythonidae—and for that matter, their South American boa brethren as well. These most northerly of the boas—found from southern California all the way up into British Columbia and as far east as Wyoming—are the pudgy folk songstresses to the serpentine Shakiras and Selenas of the western hemisphere.

They look more like kinked garden hoses than they do taut coils of muscle. Their slack skin, which wrinkles and folds when they coil up, makes them look as if they’d be more comfortable in hand-woven knits and Birkenstocks than in body stockings and stilettos. One can’t quite picture them gyrating to the sensuous strains of Latin pop, an amusing irony given the fact that their genus name derives from the Greek for “graceful.” Henri de Blainville—who formally described the species in 1835, naming it after Paul-Émile Botta, the French surgeon who discovered it—referred to their bodies as “spongy.”

Some observers have even compared these humble boas, when they are in their defensive posture, to piles of excrement. Brown on top and creamy on the bottom, they lack the ornate patterning and vibrant coloration of their tropical confreres and might, in an uncharitable moment, be mistaken for turds. But, for all of their aesthetic deficiencies, they demonstrate a fortitude that their relatives lack. Along with the rosy boa (Lichanura trivirgata) of the southwest, they are one of only two species from their family found in North America. They are remarkably cold-tolerant, sometimes found slithering through the snow and even attempting to burrow into it. They’re not typically active during the worst of winter, but they are among the first snakes in their range to emerge from hibernation in areas where it is necessary. 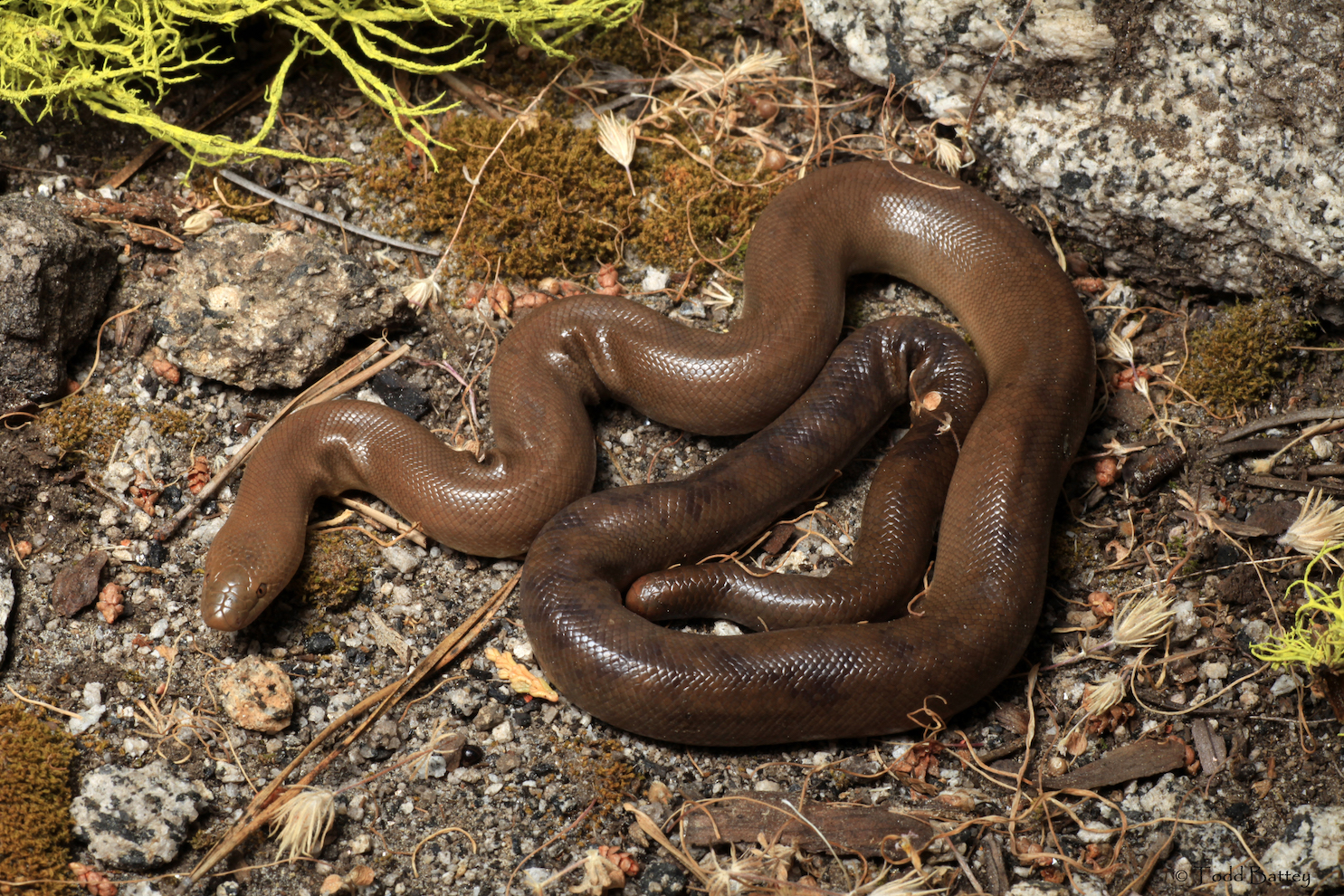 This ability to function in chilly weather, somewhat atypical in ectotherms, has allowed them to carve out a niche in areas of the world otherwise inhospitable to their close kin—and even their more distant reptilian affiliates. Specimens captured while out and about—not hibernating—have been measured as having body temperatures as low as 54°F. In addition to the benefits this confers to a species that lives in climates with extreme seasonal variations, it also facilitates a nocturnal lifestyle that may compensate for its sluggish habits. Non-reactive in the extreme, the rubber boa isn’t particularly good at evading predators, preferring a glacial slither to the whiplike velocities achieved by other serpents. So, instead, it prefers to hunt at night. The colder temperatures during that time make for slower movement, which is less likely to attract the attention of predators—hawks, coyotes, raccoons, skunks.

It was long believed that the rubber boa’s strange tail was intended to distract the creatures that might eat it. The terminal vertebrae of the tail are fused and form a head-like structure. Because of the scarring evident on this false noggin in wild specimens, it was thought that it served to distract predators.

However, further analysis has demonstrated that this is unlikely. For one, the snake’s predators tend to be large and unlikely to be deterred by a second head. Food is food. Further, the rubber boa is known for feeding on newborn rodents and insectivores such as shrews…whose parents will in fact strike at the head region of a perceived predator. Laboratory experiments have demonstrated that panicked mice will indeed sink their teeth into the fake head when their babies are at imminent risk of becoming dinner. These snakes aren’t relegated to such risky dining experiences exclusively though. In addition to eating wriggling newborn mammals, from mice to bats, rubber boas are also willing to take equally pink and tender bird hatchlings, various amphibians, the eggs of other reptiles, and, per at least one account, even rattlesnakes.

Rubber boas are largely fossorial…that is, they live underground, usually in pre-made rodent burrows or in natural crevices in rocks and plant substrates. Their skin dehydrates more rapidly than that of other snakes, so their damp hideaways likely serve to maintain their delicate complexions. Though they are believed to be relatively common throughout most of their range, they are not often sighted. They maintain tiny territories, with specimens often sighted in the same spots year after year, and prefer to remain sheltered, save for those times when a sunbath seems necessary. Though they are less likely than some snakes to emerge for some rays, females who are gestating do tend to seek out warmth in order to maintain adequate temperatures for their growing young. They are ovoviviparous. That is: their offspring hatch inside them and are born alive, with broods of two to eight young produced in the late summer or fall every few years. Rubber boa babies emerge as pink and unpleasantly dewy as the baby rodents that their mother devoured in order to sustain them.

However, unlike the squirmy mammalian babies that sustained them, baby rubber boas are immediately self-sufficient. And they may not feed for over a year, subsisting on stored energy from their mothers until after their first hibernation period. Their ability to live for long periods without sustenance persists throughout their lives…females usually do not eat while gestating and some captive specimens have survived without eating for several years, without apparent ill-effect.

For all of its rather lackadaisical lifestyle choices, populations of the northern subspecies (C. bottae bottae) appear to be relatively stable. Specimens regularly live into their 20s and one specimen first sighted in the wild in 1971 as an adult was later captured and lived until 2006 in captivity, putting it at upwards of 50 years old at the time of its death.

However, the southern subspecies (C. b. umbratica), restricted to the San Bernardino and San Jacinto mountains of southern California, was listed as threatened by the state in 1971 due to its limited range. Recent research has aimed to better understand its habits in the region and determine its eligibility for federal protection.

It would be a shame to lose this most trustworthy of snakes. They may not writhe about with the gymnastic abandon of their legless relatives, but they are among the few who perform an even more impressive spectacle—reptiles on ice. No triple lutzes in evidence, admittedly, but given their ectothermic restrictions, even a little shimmy is a noteworthy accomplishment.