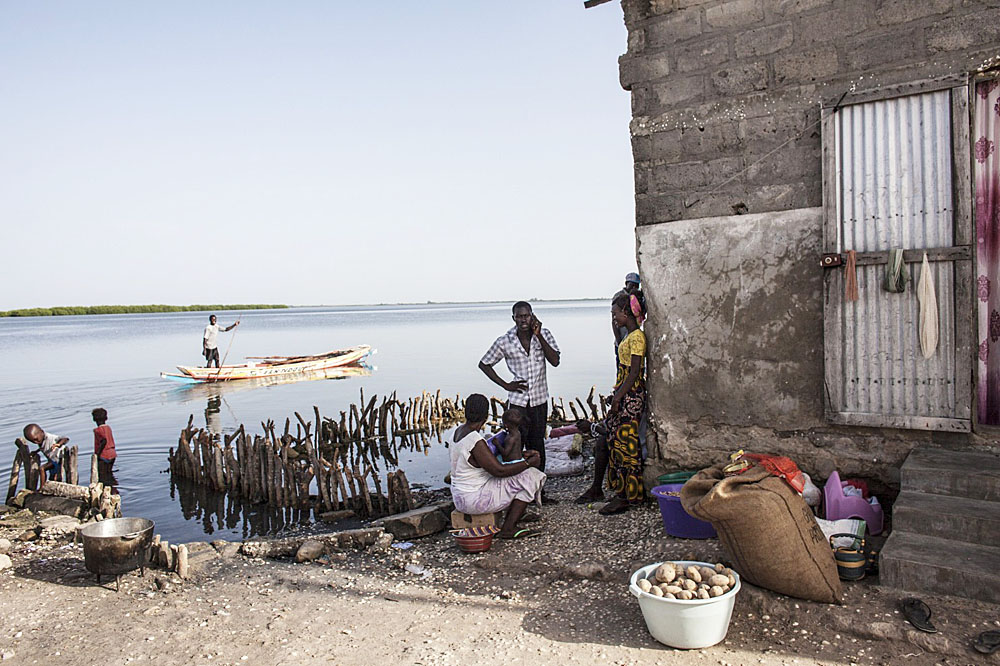 The place where Fatou Faye’s kitchen once stood is now outlined with short branches of mangroves, a small and perhaps futile attempt to prevent the sea from destroying the rest of her house.

The rising sea levels pushing into the waters of Senegal’s Saloum Delta islands threaten to carve the rest of her gray cement home from its foundation, leaving her and 30 other relatives homeless on low-lying Diamniadio Island.

“I am very afraid for my sons and grandsons and for when the next house collapses,” says the 60-year-old, looking down and adjusting the peach and blue scarves intertwined around her head. “But I have no money and no land, so there’s nowhere else to go.”

She cooks peanuts in front of a patchwork aluminum shack separated from the house, gazing to the water’s edge where other homes once stood. She said they all brace themselves for the full moon that pushes the tides even higher.

Faye and thousands of others on these tiny islands and villages in this part of West Africa are living on the frontline of climate change: Not only are water levels here now higher than they used to be, droughts and erratic rainfalls lead to floods that carve through the white-shell-lined alleyways, and increased salt levels are poisoning the fresh waters, land and agriculture. The loss of mangrove habitat – driven by nature and human actions – means coastal lines and fish breeding grounds are being erased.

The islanders’ way of life is fundamentally changing with the climate, and livelihoods based on fishing and agriculture are disappearing, leaving them with little income and fears of starvation. Some are making the perilous journey to Europe in hopes they can help support their families.

Activists working to save these islands in Senegal hope their plight is front and center at an upcoming U.N. climate summit in Paris.

“It is important that the world knows about the cases you have on the islands, because climate change is not just about one house or one country. You know, we are living on the same planet,” said Aissata Dia, ActionAid Senegal’s head of programs and policy.

“I just want them to visit our islands, where they can’t do agriculture” and must walk miles or take a boat to buy fruit, vegetables and the rice they used to grow, she said.

In 1987, strong northwest waves breached the Sangomar sandbar that protected the delta, speeding up the invasion of salt water from the Atlantic Ocean about two decades after a severe drought led to the loss of major mangrove habitat.

A government-funded program has paid for sea walls in front of several villages, including Rofangue. Ibrahim Sarr, a Rofangue community leader, said the government consulted the village when it built the wall, but it is not high or long enough, and it’s too close to the village.

Many homes still are flooded; water also often collects behind the wall, and residents must empty it back to the sea.

He pointed hundreds of meters away to a small peninsula that juts out from the village – the old cemetery, final resting place for 200 villagers. The waters unearthed a body last year, he said, and they had to rebury it in a new cemetery they’ve created within the village.

“We are angry to see our ancestors disrespected,” said Sarr, whose father is buried there.

The rising sea also has increased salt levels in the nearby water, poisoning the soil and killing crops.

Bineta Fall, 72, remembers the days of abundance in the village of Baout on an island close to the mouth of the sea, when people here could harvest their own rice. That was more than 20 years ago, before the salt contamination. Now these communities have to buy the very products they once cultivated, with little income to do so.

“I’m afraid we might starve in the village,” Fall says as her eyes well up with tears. “In the deepest part of my heart, I loved harvesting rice. And the new generation doesn’t know the work it takes.”

In Baout village, home to nearly 1,100 people, the earth is dry, white and salty.

When the community lost its rice crops, residents turned to collecting shellfish and fishing for food and money. But when the mangroves die they take with them breeding grounds for the fish; illegal overfishing takes its toll, as well. Now, fishing vessels must go out farther for their catch, and it takes more time, money and effort to earn a living.

Years ago, one might have gathered up to 30 kilograms (66 pounds) of fresh fish in three hours of work. Now you’d be lucky to get 5 kilograms (11 pounds) in a day, residents say.

Fall is so determined to revive her land that, with the help of ActionAid, she’s set up a patch to test the use of fish meal to take the salt from the soil. Rice is now growing in that 15-foot-by-15-foot spot.

Along with the construction of sea walls, local non-governmental organizations are working with the communities to set up sand barriers, provide water tanks to collect rain water, and grow table gardens with soil made from peanut shells and other material.

They’re also replanting mangroves that form the first line of defense against salty sea water. These trees also protect against shoreline erosion and storm surges, serve as retention and filtration systems and can provide wood for cooking to those who can’t afford fuel.

“It’s the best means to stop this. It’s the least expensive and most durable approach and it’s the way to save these islands,” from disappearing, said ecologist and former Senegalese Minister of Environment Haidar El Ali, who has led replanting campaigns for nearly a decade.

In the community of Nema Ba on the mainland, mangrove replanting has allowed those living there to collect oysters and crabs, or farm eggplants, onions or other crops.

On a sweltering afternoon, a group of nearly 100 women and some men sing and dance before work begins, praying for continued success in protecting their village.

Seynabou Diatta, the president of the local group Let’s Work Together, says women used to cut down mangrove trees for firewood. They are now using less, and only taking it from designated areas.

As she leads the replanting, she digs her heels into the wet, muddy earth, creating lines a couple feet apart. Women quickly drop in seedlings, the stems reaching toward the sky.

“Without the mangroves we cannot live,” she says.