Sand crabs and comets have more in common than you may think • Earth.com 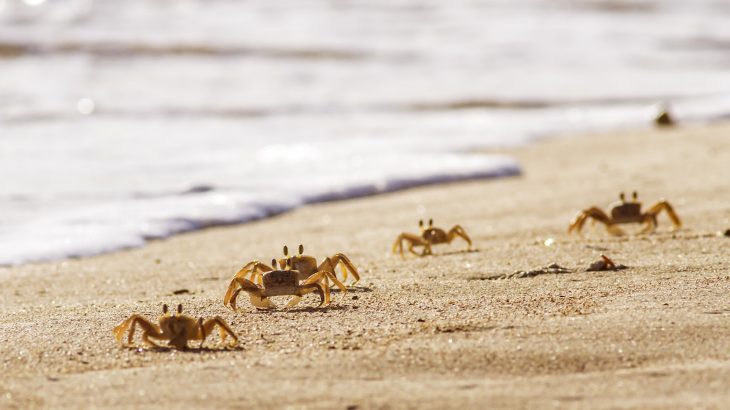 What do sand crabs and comets have in common? You may be surprised. Researchers recently found a link between the mechanics of a sand crab’s tunnel and the pits that cover your typical comet.

If you walk on a sandy beach, you might notice an array of holes near the shoreline which are entrances to narrow tunnels burrowed by sand crabs. Sand crabs feed on tiny plankton and can quickly scope out their prey as the waves wash up near the burrows.

Researchers from Nagoya University knew that the wet grainy mixture of sand was a key component for sand crab burrows and so conducted a study to better understand how the tunnels kept their strength and stability.

First, the researchers modeled crab tunnels in a wet mixture of tiny glass beads and water which was meant to replicate the densely packed damp sand near the shoreline.

The team dug different size holes with varying widths and diameters to test the structural capacity of the burrows. Interestingly, when the researchers pressed on the “sand” above a tunnel, the burrow shrunk.

However, the larger in diameter a burrow, the less stable it was and more likely to collapse. It was diameter which is dependent on the size of sand granules that determined how strong the tunnel was and the pit that formed after collapse.

The researchers discovered there was a threshold between a burrow collapsing but not disrupting the soil above and collapsing into a pit. This threshold was anywhere between five centimeters and seven centimeters in diameter.

Sand crabs burrows are rarely larger than five centimeters which means that the crabs know how big is too big for an unsafe burrow.

The researchers next looked to comets because many comets are covered in pit structures like those of a collapsed sand burrow.

It’s been suggested that the origin of these pits on comets is the volatile materials that make up the comet itself, a cohesive mixture of ice and solid particles.

The researchers were able to apply their threshold model to comet pit structures and found that the boundaries were similar as far as the diameters of the holes on the comet and the kind of collapse that followed.

The results show that tunnel collapse in granular matter is more universal than previously thought and besides explaining cometary pits, the study could also help aid in disaster prevention methods for roads and bridges in the future.