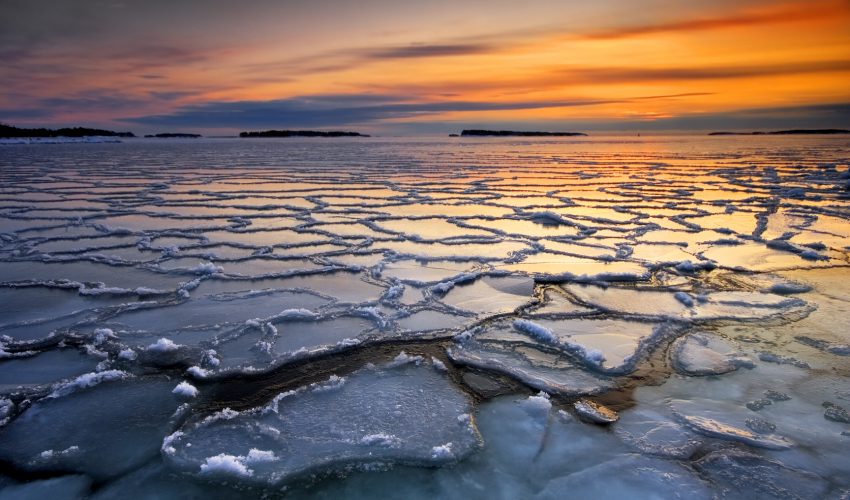 Sea ice algae grow in the darkest areas ever recorded

Experts from Aarhus University have discovered that small algae residing under Arctic sea ice have adapted to live in extreme conditions. The microscopic algae need only 0.02 percent of the light at the ice’s surface for survival, which sets a new world record.

In the Arctic, the winter season is completely dark. Even when the sun re-emerges in the springtime, very little light can penetrate the compact ice and snow.

Since algae need light to live, researchers wanted to investigate how sea ice algae live in a low light habitat that is below freezing for long periods of time throughout the year. They focused their study at the Villum Research Station in northeastern Greenland.

“We worked on the sea ice in April-May, where there was a meter of sea ice and a meter of snow on top of the ice,” explained lead author Lars Chresten Lund-Hansen. “With special ice corers we drilled holes in the ice so that we could measure the ice algae on the underside of the ice and collect samples.”

Sea ice algae are critical components of the Arctic food web. They are particularly important in the early spring, when plankton algae are not yet active.

The study revealed that the sea ice cover and the depth of the snow did not change significantly during the month of May. However, as the snow got warmer, optical conditions changed – allowing more light to reach the underside of the ice.

“Our measurements showed that the ice algae began to grow at a light intensity below 0.17 μmol photons m-2 s-1,” said study co-author Kasper Hancke. “This corresponds to less than 0.02% of the amount of light that reaches the surface of the snow on a sunny day.”

This is the lowest light level ever observed to promote active photosynthesis and ice algae growth. The findings suggest that ice algae assume an important role much earlier in the spring than previously realized.

“Temperatures are rising in the Arctic,” said Lund-Hansen. “When the snow on top of the ice gets warmer, the algae residing on the underside of the ice receive more light. This may significantly impact the growth of the algae and the extent of the ‘spring bloom.’ This new knowledge must be considered in the puzzle of how the Arctic will respond to a warmer world.”

The study is published in the Journal of Geophysical Research.