‘Sheep-eating plant’ appears in a flowerbed in the UK • Earth.com 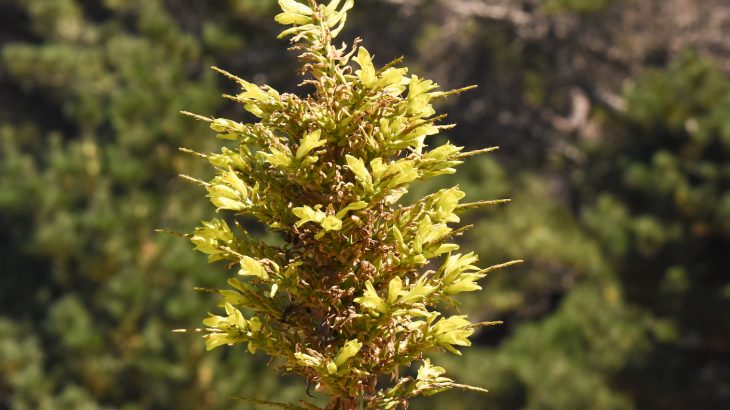 ‘Sheep-eating plant’ appears in a flowerbed in the UK

A predatory plant recently spotted in Cornwall has a frightening way of feeding on animals by trapping them with sharp leaves and waiting for them to die. Puya chilensis, also known as the “sheep-eating plant,” is native to the hillsides of the Chilean Andes and is an unusual sight in the UK.

The South American plant has razor-sharp hooked spines that are growing on its leaves from the ground up. The spines are thought to have evolved as a defense strategy, yet it seems that Puyas can use these spikes offensively as well.

When sheep, goats, birds, and other animals get their fur hooked on the spines, they become trapped and starve to death. The decomposing bodies release nutrients into the soil surrounding Puya that support its growth. The smell of the decomposition often attracts other animals, which also become potential prey for Puya.

Truro county gardener Liam Shoesmith announced that he had spotted the plant growing in a flower bed in the city center while speaking on BBC Radio Cornwall’s Garden Line.

“I was amazed when I saw it – it was a very, very impressive plant. I used to sell them in pots when I worked in a nursery so to see one flower was fantastic,” said Shoesmith.

P. chilensis grows very slowly, ultimately reaching a height of about two meters. It often takes 20 years or more for Puya to flower, which is soon followed by death. Shoesmith told MailOnline that the plant was placed downtown deliberately by a Truro in Bloom group, and he suspects there are more Puyas living in the flower bed.

“It usually grows around the Andes where goats and sheep get their wool caught on its hooks,” Shoesmith told Cornwall Live. “They die and the nutrients seep into the ground allowing Puya to grow. It’s not quite like Little Shop of Horrors.”