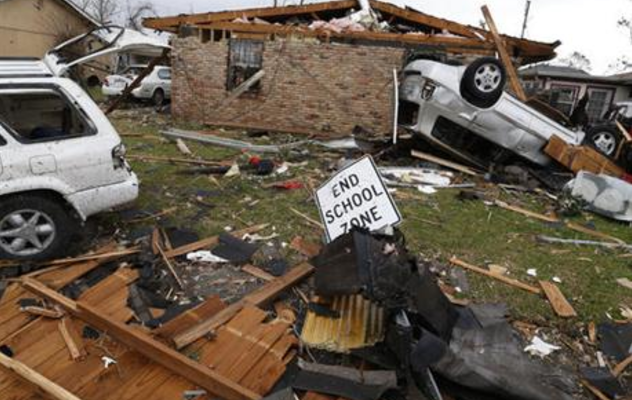 A storm system that included as many as six tornadoes churned through southeastern Louisiana on Tuesday, injuring about 40 people.

New Orleans East was hit particularly hard by the storms – quite a blow to an area that was previously devastated by Hurricane Katrina in 2005. About 20 people were hurt there when an EF2-strength tornado touched down, tearing roofs off of houses and sending the New Orleans Police Department scrambling to assist with emergency response efforts.

The storm damaged NASA’s Michoud Assembly Facility and the USDA’s National Finance Center’s Primary Business Center. There were only minor injuries among the people in those buildings.

Brittany Ross lived in a trailer park in eastern New Orleans. When the storm hit, her trailer “started shaking, kind of twisting,” she told the Associated Press. The wind lifted her home up before slamming it back down again. She and two others were able to crawl from the remains of the trailer and escape to safety.

The six tornadoes prompted Louisiana governor John Bel Edwards to take an aerial tour of the damage. He also declared a state of disaster in order to provide relief to those affected.

The storms also swept through Baton Rouge, damaging structures and causing minor injuries. Several homes were destroyed in Killian, a town just east of Baton Rouge. There, an elderly couple were injured, with one suffering a broken arm and the other one a broken leg. The town’s mayor, Craig McGehee, was amazed the couple survived.

“How you manage to get blown completely across the street with cinderblocks flying and no worse than a couple broken limbs — apparently the good Lord was looking after them,” he said.

Quarter-sized hail fell in Little Rock Arkansas and high winds and waterspouts plagued the coast of northwest Florida as the storm moved eastward. Wind gusts up to 62 miles per hour were reported in Henning, Tennessee.