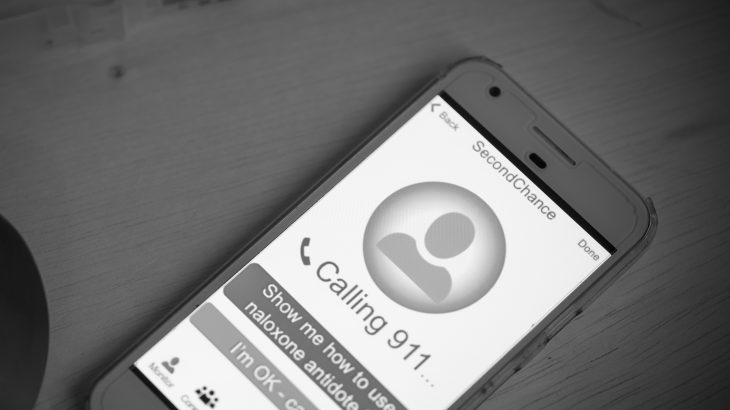 Second Chance is a new smartphone app that could mean the difference between life or death for those addicted to injectable opioids. The app, created by researchers at the University of Washington, uses sonar to monitor a user’s breathing rate and detect if an overdose has occurred.

According to the National Institute on Drug Abuse, 115 people die daily from opioid overdose in the United States. With statistics this high, America is currently struggling with a drug-centric epidemic and public health crisis. The hope is that Second Chance will allow opioid users to get access to the life-saving drug naloxone before it’s too late.

“The idea is that people can use the app during opioid use so that if they overdose, the phone can potentially connect them to a friend or emergency services to provide naloxone,” co-corresponding author Shyam Gollakota, an associate professor in the UW’s Paul G. Allen School of Computer Science & Engineering, said. “Here we show that we have created an algorithm for a smartphone that is capable of detecting overdoses by monitoring how someone’s breathing changes before and after opioid use.”

The team’s report, published January 9th in Science Translational Medicine, notes that the app accurately detects overdose-related symptoms 90% of the time and can measure breathing rate from up to 3 feet away. It does so by sending inaudible sound waves from the phone and to users’ chests. Then, based on how the sound waves return to the phone, it can pinpoint breathing patterns. Second Chance also monitors movement, like head-slumping, which is a sign of overdose.

“We’re looking for two main precursors to opioid overdose: when a person stops breathing, or when a person’s breathing rate is seven breaths per minute or lower,” added co-corresponding author Dr. Jacob Sunshine, an assistant professor of anesthesiology and pain medicine at the UW School of Medicine. “Less than eight breaths per minute is a common cutoff point in a hospital that would trigger people to go to the bedside and make sure a patient is OK.”

Researchers tested the app in a study in which they partnered with a supervised injection facility in Vancouver, Canada. “We asked participants to prepare their drugs like they normally would, but then we monitored them for a minute pre-injection so the algorithm could get a baseline value for their breathing rate,” said lead author Rajalakshmi Nandakumar, a doctoral student in the Allen School. “After we got a baseline, we continued monitoring during the injection and then for five minutes afterward, because that’s the window when overdose symptoms occur.”

The team also tested the app on healthy participants who underwent of a simulated overdose via anesthesia. The Second Chance algorithm correctly detected 90% of actual overdose symptoms at the supervised injection site, and 19 out of 20 simulated overdoses.

Ultimately, the team wants the app to be more interactive with the user, asking them to complete a task on the phone is overdose signs are detected. If no interaction happens, then the phone will contact emergency services.

“The goal of this project is to try to connect people who are often experiencing overdoses alone to known therapies that can save their lives,” Sunshine said. “We hope that by keeping people safer, they can eventually access long-term treatment.”

Main Image: If a person fails to interact with the app, it will contact someone who can administer naloxone.