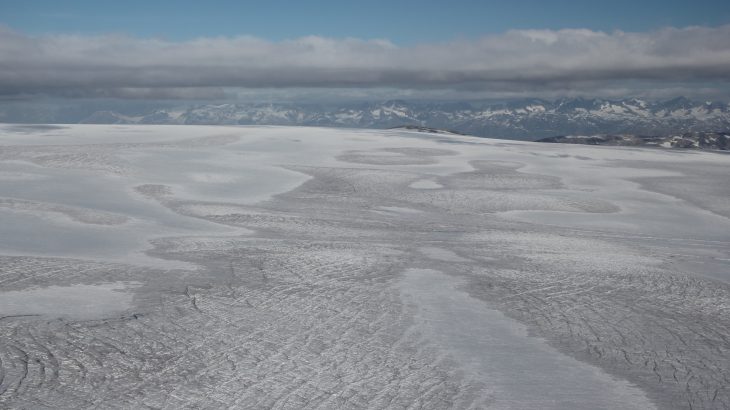 “People who study alpine glaciers have recognized the importance of snowlines for years, but no one had explicitly studied them in Greenland before,” said co-author Laurence C. Smith, a visiting fellow at the Institute at Brown for Environment and Society (IBES). “This study shows for the first time that this simple partitioning between bare ice and snow matters more when it comes to melting than a whole host of other processes that receive more attention.”

“We found that models don’t reproduce snowlines very well, which adds an uncertainty to future projections,” said lead author Jonathan C. Ryan, a postdoctoral researcher at Brown. “But now that we’ve shown how important the snowline effect is, and have some direct observations of snowline positions, hopefully we can improve these models going forward.”

Bright white snow reflects sunlight back into the atmosphere, whereas bare ice, often dark in color, absorbs sunlight, and therefore, absorbs radiation. This radiation heats the ice and causes melting. This process is nothing new to scientists, however the process had never been put into perspective in regards to the Greenland ice sheet and if/how snowline migration plays into the regulation of annual melt.

Ryan first noticed the importance of snowline migration while trying to record snowline positions on the ice sheet with aerial drones. After pausing for a few days due to wind, he and his colleagues saw something odd when they returned to the project.

“Suddenly the snowline was just gone,” Ryan said. “In a couple of days it had moved 30 kilometers or so up the ice sheet and was now out of the range of our drones. That was the first moment we thought we should investigate the effects of snowline movement on melt.”

So, Ryan and his teammates looked at satellite images depicting snowline positions on the ice sheet between 2001 and 2017. They saw a significant snowline movement from year to year. The highest elevation level was in 2012, a year that saw massive ice sheet melting. The team also recorded the snow reflected about 79% of the radiation that hit it, whereas the ice reflected only between 45% to 57%. The pairing of the elevation and reflectivity was and is still crucial to radiation absorption. In fact, the team found that 53% of year-to-year radiation variability is dictated by the snowline position.

“We’re collaborating now with the modelers, providing them with our observed snowlines,” Ryan added. “That gives them some ground truth they should be able to use to adjust their models. Now there’s something to aim for.”