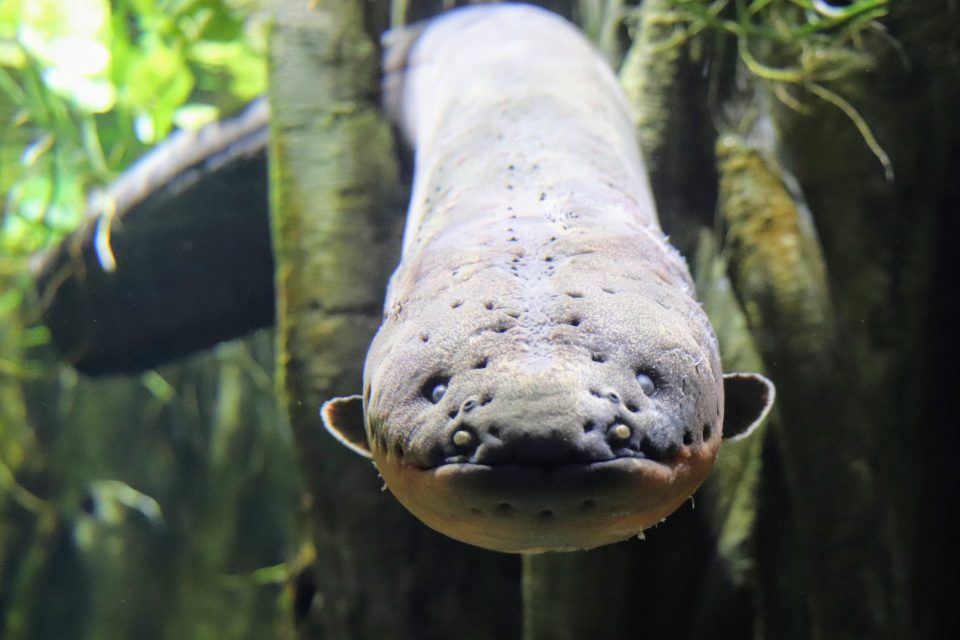 In a new study led by the Smithsonian, researchers have discovered electric eels hunting in groups for the first time. The unexpected behavior was observed in a small lake in the Amazon River basin that was filled with more than 100 adult electric eels.

The eels teamed up to herd small fish called tetras into tightly packed balls. Groups of up to 10 eels collaborated to launch an attack, surrounding the fish and shocking them into submission.

“This is an extraordinary discovery,” said study senior author David de Santana. “Nothing like this has ever been documented in electric eels.”

The findings raise new questions about the lifestyle and behavior of electric eels, which were previously thought to be solitary predators.

“Hunting in groups is pretty common among mammals, but it’s actually quite rare in fishes,” said de Santana. “There are only nine other species of fishes known to do this, which makes this finding really special.”

The research is the latest of de Santana’s ongoing investigation into freshwater fish diversity in South America. His expeditions to the remote waters of the Amazon and its many tributaries have uncovered 85 new species of electric fish.

Last year, de Santana identified two new species of electric eels. One of the new species, Volta’s electric eel, is capable of producing 860-volt electric shocks. This is not only the strongest electric discharge of any animal on Earth, but is also 210 volts higher than the previous record.

The current study was focused on Volta’s electric eels, which can reach lengths of 8 feet.

“If you think about it, an individual of this species can produce a discharge of up to 860 volts – so in theory if 10 of them discharged at the same time, they could be producing up to 8,600 volts of electricity,” said de Santana. “That’s around the same voltage needed to power 100 light bulbs.”

Two years later, the team logged 72 hours of continuous observation of the eels congregating in this location along the Iriri River.

For most of the day and night, the eels layed almost motionless in the deeper end of the lake, only coming to the surface occasionally to take a breath. The scientists found that the eels became active at dusk and dawn – interacting with each other and then swimming in a large circle.

The eels corralled thousands of the tiny tetras into tighter and tighter shoals as they herded them into shallow water. Once the tetras were trapped by the main group, de Santana said that bands of two to 10 eels would move in closer and then launch synchronized electric attacks on the prey ball.

The electric shocks sent the tetras flying out into the air, and then they fell back into the water stunned and motionless. De Santana noted that each dawn or dusk hunting ritual took around one hour and contained between five to seven high-voltage attacks.

“This is the only location where this behavior has been observed, but right now we think the eels probably show up every year,” said de Santana. “Our initial hypothesis is that this is a relatively rare event that occurs only in places with lots of prey and enough shelter for large numbers of adult eels.”

According to de Santana, these large gatherings of electric eels are not likely to be very common.

“These animals can be 8 feet long and produce 860-volt electric shocks; if 100 of them being in one place was a common occurrence, I think we would have heard about it before now.”

With the Amazon under threat from deforestation, wildfires, and climate change, de Santana said there is a profound sense of urgency to accelerate biodiversity assessment in the region.

“Electric eels aren’t in immediate danger, but their habitats and ecosystems are under immense pressure. This paper is an example of how much we still don’t know, how many organisms whose life histories we don’t yet understand.”

The study is published in the journal Biology and Evolution.