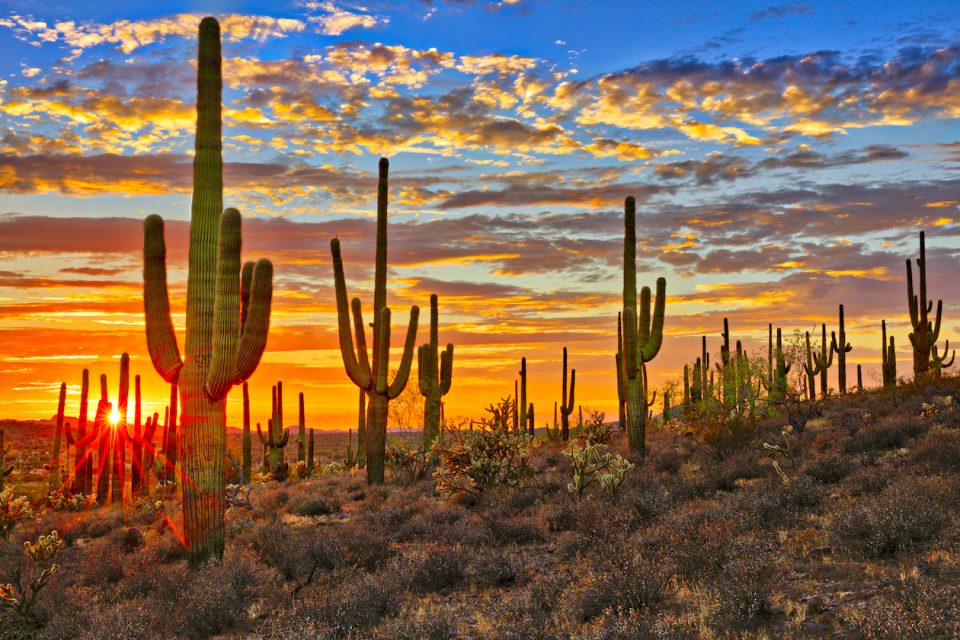 Irregular Sonoran monsoon highlights danger of always blaming climate change. The Sonoran Desert in the United States is home to the large cities of Phoenix and Tucson, Arizona. On June 26, 1990, Phoenix had its hottest day on record, a sweltering 122 degrees Fahrenheit. Although California’s Death Valley has reached hotter temperatures, Phoenix is consistently one of the hottest cities in the US with temperatures rising to above 100 degrees daily from May through September.

There is typically one relief to the physical assault of these extreme temperatures. The Sonoran Desert also has an annual rainy season in the summer. The monsoon rains are where most of the region’s precipitation comes from. Actually, 70% of the annual precipitation in the Sonoran comes during the summer monsoon.

The monsoon rains have created a desert within the Sonoran like no other in the world and certainly not like any other in North America. The Sonoran Desert covers 120,000 acres of land in Arizona, California and in Mexico – Baja California and Sonora. The desert is the most biodiverse in North America, with 2,000 native plants, 100 species of reptiles, 60 mammals and 350 bird species.

At times, walking in the Sonoran it feels more like a forest of saguaro cactus, ocotillo and polo verde rather than a desert at all. The plants and animals in the Sonoran have adapted to dry conditions but also to take advantage of rain bursts, essential for their long term survival. Humans like other animals have long called the Sonoran home and adapted to its beautiful but harsh conditions.

The Sonoran Desert has been inhabited by humans for at least 12,000 years, the Arizona-Sonora Desert Museum reports. The Hohokam of the Sonoran created the largest system of pre-Colombian irrigation canals in North America and created a unique system of agriculture adapted to the Sonoran. Or course, European Americans created a much larger and more intensive irrigation and dam system across the whole of the arid western landscape.

Cities with human densities like Phoenix and Tucson wouldn’t be possible without intensive water systems. These systems are already on shaky ground from a sustainability standpoint, emptying the Colorado River as it’s about to reach the Sea of Cortez and draining aquifers at a pace that can’t be replenished naturally. Drought only adds another dimension to the predicament.

This year, the monsoon rains in the Sonoran Desert have been rather unimpressive so far. AZCentral reports that predictions show a slow start to the Sonoran monsoon season with rain between June and August lower than usual. An easy conclusion to come to would be that global climate change is contributing to the drier and later start to the monsoon, but climate and weather are complicated.

El Niño conditions in the eastern Pacific Ocean may be a factor in the late start to the monsoon, even though any correlation between the two is minimal. The El Niño created lower than normal spring temperatures, which in turn could be delaying the monsoon later in the summer. Hot air over Mexico builds winds that drive the rain bearing clouds north into the Sonoran Desert, causing the monsoons. Weather in the region and further south is hot now though, which may in turn drive a later monsoon in August and September.

The irony of the hot, dry summer is that it was caused by a wetter, colder winter. Near Tucson, the year began with a New Year’s morning light blanket of snow across a prickly landscape of cactus. Across the west, the overall winter was even more impressively snowy and cold. OpenSnow reports that some high elevation parts of the US had reasonable snowpack into July this summer.

The snow started dumping relatively early in November and continued through the winter, allowing many ski resorts in the west to stay open later into the year than usual. The Denver Post called the winter ‘remarkable’ and noted that the snowpack in Colorado was 161% of the 1981-2010 median.

I reported earlier about Trump’s mockery of climate change science in the face of cold weather. This is a common tactic for Trump and other climate change deniers, but it also teaches those concerned about climate change a valuable lesson.

Climate change is about gradual average temperature change over time. The Weather Channel reports that although there is no real controversy over the fact that carbon emissions are driving a changing climate, specifics are complicated.

Trump and others are right to be ridiculed for their arrogance when they proclaim a bad snow day in February invalidates climate change science. For every warm day in the winter and every drought, flood, hurricane or tornado, it’s important to understand, these don’t prove climate change either. The world is complicated and even without a damaged climate, there is variation and the line of causality between a heavy snow in winter and a dry hot day in summer is hard to trace.

The complicated nature of weather patterns over the Gulf of Mexico and those over the dry canyons, mountains and prairies of the southwestern US are interlinked in ways not easily simplified into brief statements. If we are to keep on the side of scientific understanding, it’s best to embrace the complex nature of our world. Climate change is happening, but to imagine that any one model can capture the whole of it is the same arrogance that blinded us to the interconnectedness between human luxury and climate in the first place.