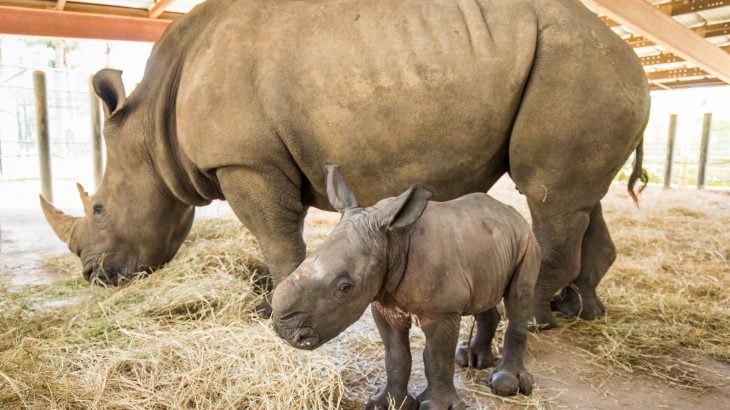 On September 12th, Alake, a Southern white rhinoceros, gave birth to a calf, the sixth white rhino calf to be born successfully at ZooTampa in Florida.

Once thought extinct, decades of management and conservation efforts have brought the southern white rhino back from the brink to near threatened status.

This is the complete opposite of the northern white rhino of which now only two exist in the entire world, both of which are female.

At ZooTampa, conservation is a top priority and this latest addition to the zoo just further shows how committed the zoo and its staff are to the preservation and restoration of southern white rhinos.

Over the past 20 years, ZooTampa has donated $100,000 to conservation projects like habitat repair and restoration in Africa along with efforts to stop poaching.

Poaching rhinos for their horns is the number one driver behind many rhino species’ endangerment.

The calf and its mother are currently bonding and isolated away from the rest of the herd. However, the zoo staff says that eventually the calf will be introduced to the herd and the rest of the rhino habitat.

Last month, the zoo was host to another rare birth, that of an okapi. Okapis are classified as nearly threatened and you will only find them in the wild in one place, the Democratic Republic of Congo.