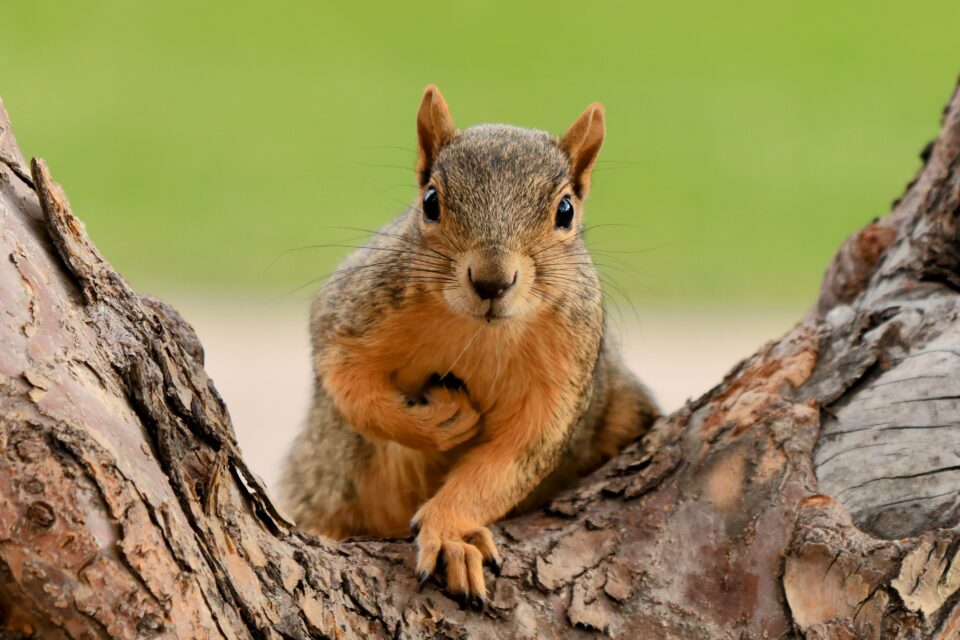 In a study published today in the journal Science, researchers from UC Berkeley report how squirrels make split-second decisions about when to leap from branches in order to secure a peanut reward. The scientists made videos of fox squirrels as they leaped and landed in the canopy of a eucalyptus grove on the university campus in order to reach their desired goals.

The squirrels were offered novel launching pads, such as flimsy, rigid or overly bendy branches. The researchers observed that squirrels quickly adjusted to the new launching conditions. They modified their body position in mid-flight if a leap did not go quite according to plan, and were supremely adept at sticking the landings.

“When they leap across a gap, they decide where to take off based on a trade-off between branch flexibility and the size of the gap they must leap,” said Nathaniel Hunt, former UC Berkeley doctoral student and current assistant professor of Biomechanics at the University of Nebraska.

“And when they encounter a branch with novel mechanical properties, they learn to adjust their launching mechanics in just a few jumps. This behavioral flexibility that adapts to the mechanics and geometry of leaping and landing structures is important to accurately leaping across a gap to land on a small target.”

However, when deciding whether or not to jump, squirrels do not give equal attention to the bendiness of the branch and the distance of the gap. The flexibility of the branch is six times more critical than the gap distance when deciding whether to jump. The researchers felt that this was due to the fact that squirrels can rely on their sharp claws to help them cling on, even when the landing is not perfect.

Despite being put through some tricky and unexpected manoeuvres in order to get to the peanuts, no squirrels fell during the entire study. Their ability to innovate and learn rapidly was evident in their locomotion solutions.

The squirrels were even able to change orientation while in mid-air and then push off from a vertical surface in order to adjust their speed for a better landing. This is reminiscent of human parkour, where people jump, swing, somersault and vault through the urban environment as a form of sport.

An understanding of how squirrels learn to travel through a complex environment could be applied to develop robots that need to move through challenging landscapes, such as collapsed buildings where survivors might be found.

“As a model organism to understand the biological limits of balance and agility, I would argue that squirrels are second to none,” said Hunt. “If we try to understand how squirrels do this, then we may discover general principles of high-performance locomotion in the canopy and other complex terrains that apply to the movements of other animals and robots.”