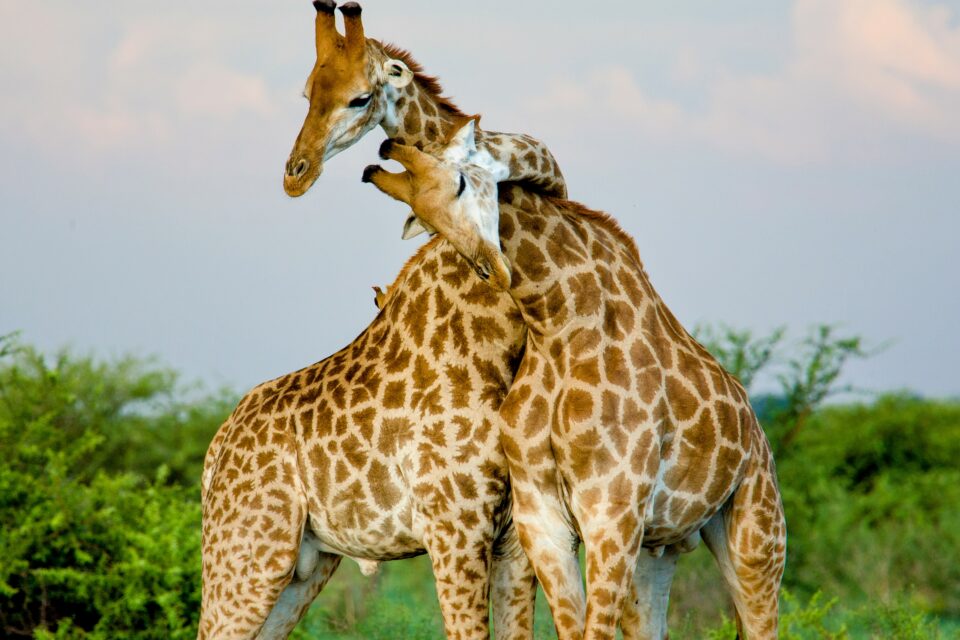 Rudyard Kipling might very well have chosen to write a “Just So” story about how the giraffe got its long neck. It would probably have been about how the leaves of the tall Acacia trees are preferred food for giraffes but only those with the longest necks could reach them. For although there have been many different views about the exact evolutionary process of giraffe neck elongation, scientists have never doubted that the impetus for neck elongation was high altitude foliage.

However, the analysis of a strange new fossil by researchers from the Institute of Vertebrate Paleontology and Paleoanthropology (IVPP) of the Chinese Academy of Sciences may cast new light on this age-old story. The fossil is a type of early giraffoid known as Discokeryx xiezhi, and among the fossilized remains are a well preserved skull and four neck vertebrae. The remains were found in early Miocene strata, dated at about 17 million years ago, on the northern margin of the Junggar Basin, Xinjiang.

Details of the study, published today in the journal Science, point to some unusual morphological adaptations in this ancient species. Although it is a giraffoid and possible precursor to modern giraffes, it did not have a long neck. It did, however, have a most unusual bony pad right in the middle of its forehead, and its cervical vertebrae showed unique connections that hint the animal was adapted to survive the heavy impacts associated with head-butting.

“Discokeryx xiezhi featured many unique characteristics among mammals, including the development of a disc-like large ossicone in the middle of its head,” said study co-author Professor Deng Tao. He noted that the single ossicone resembles that of the xiezhi, a one-horned creature from ancient Chinese mythology – thus giving the fossil its name.

As far as the neck vertebrae are concerned, the researchers report that these were very stout and strong, and the animal had the most complex joints between head and neck and between adjacent cervical vertebrae of any mammal. The team demonstrated that the complex articulations between the skull and cervical vertebrae of Discokeryx xiezhi were particularly adapted to high-speed head-to-head impact, a behavior often associated with conflict between rival males during breeding time.

They researchers found that the large, bony pad (or ossicone) of Discokeryx xiezhi was far more effective than that of extant animals, such as musk oxen, that are also adapted to tolerate severe head impacts. In fact, Discokeryx xiezhi may have been the best adapted head-butting vertebrate ever.

Interestingly, modern giraffes also show butting behavior. Male giraffes compete for females by fighting with other males. During this fighting, a male swings his heavy skull, armed with bony ossicones and osteomas, into his opponent’s vulnerable soft tissues. The authors of the study propose that this aspect of giraffe behavior would conceivably also favor the possession of a long neck. The longer the neck, the greater the momentum of the swing and the more damage done.

“Both living giraffes and Discokeryx xiezhi belong to the Giraffoidea, a superfamily. Although their skull and neck morphologies differ greatly, both are associated with male courtship struggles and both have evolved in an extreme direction,” said WANG Shiqi, first author of the study.

The experts state that this unusual fossil giraffoid helps to understand how the modern giraffe’s long neck may have evolved as well as to appreciate the extensive integration of courtship struggles and feeding pressure. In fact, they propose that the neck size of male giraffes is directly related to social hierarchy, and that courtship competition is the driving force behind the evolution of long necks.

When the research team compared the horn morphology of several groups of ruminants, including giraffoids, cattle, sheep, deer and pronghorns, they found that horn diversity in giraffes is much greater than in other groups. In addition, the horns of giraffes tend toward extreme differences in morphology, indicating that courtship struggles are more intense and diverse in giraffes than in other ruminants.

Furthermore, the ecological environment that Discokeryx xiezhi occupied was most probably fairly dry, barren grassland, which would not necessarily have contained an abundance of available food. The Earth was in a warm period and generally densely forested at that time, but the Xinjiang region, where Discokeryx xiezhi lived, was somewhat drier than other areas because the Tibetan Plateau to the south had been rising dramatically, thus blocking the transfer of water vapor.

“Stable isotopes of tooth enamel have indicated that Discokeryx xiezhi was living in open grasslands and may have migrated seasonally,” said study co-author Meng Jin. For animals of the time, the grassland environment was more barren and less comfortable than the forest environment, which may have led to the violent fighting behavior of Discokeryx xiezhi as it competed to survive in this more stressful landscape.

Around seven million years ago, when the genus Giraffa first emerged on the East African Plateau, the environment was also undergoing a change from forest to open grassland, and the direct ancestors of giraffes had to adapt to these changes. It is possible that, among giraffe ancestors during this period, mating males developed a way of attacking their competitors by swinging their necks and heads. This extreme struggle, supported by sexual selection, could thus have led to the rapid elongation of the giraffe’s neck.

Thus, the researchers propose, the original purpose of a long neck in early Giraffa species was to compete successfully with other males for access to females. However, having a long neck would also have predisposed these animals for the niche of feeding on high altitude foliage. Furthermore, occupying a marginal ecological niche may have led to more extreme intraspecific courtship competition, which in turn may have promoted even more extreme morphological evolution.