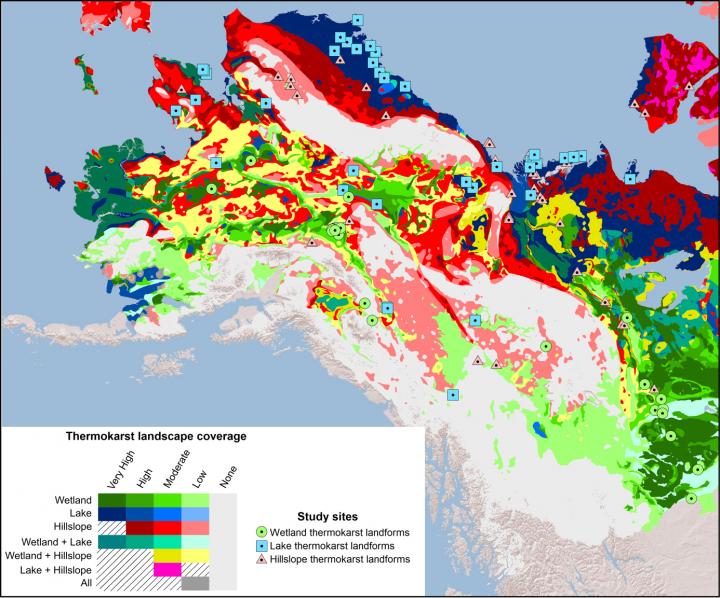 A new mapping project has identified regions worldwide that are most susceptible to dramatic permafrost thaw formations, known as thermokarst, and the resulting release of greenhouse gases.

University of Alaska Fairbanks researchers David McGuire and Vladimir Romanovsky were part of the project, which was led by University of Alberta researcher David Olefeldt. They found that about 20 percent of the globe’s northern permafrost region is potential thermokarst landscape. The research can be used in infrastructure and ecosystem planning and greenhouse gas modeling.

The journal Nature Communications published the study this week.

Northern permafrost soils store twice as much carbon as is currently in the atmosphere. When permafrost thaws, the organic matter in the previously frozen soil begins to decay, releasing greenhouse gases like carbon dioxide and methane. Those gases can contribute to climate warming and further permafrost thaw.

“The most dramatic changes are likely to occur where permafrost thaw is accompanied by land surface collapse, known as thermokarst,” Olefeldt said. Scientists can use the new map to test assumptions about how fast the soil organic matter will turn into greenhouse gases in these areas.

Thermokarst occurs when thawing soil contains large amounts of ice. When that soil and ice thaws, the water drains away, leaving a void that can lead to more than two dozen distinct collapse landforms, including gullies, slumps, wetlands and lakes. Each type affects greenhouse gas emissions in its own way, and up until now no one has been able to account for all of them at the global scale.

“There haven’t been good estimates on how thermokarst disturbance could affect the release of carbon out of the soil,” said McGuire, who is part of the Alaska Cooperative Fish and Wildlife Research Unit at the UAF Institute of Arctic Biology and U.S. Geological Survey.

“This map is a first step to answer how the landscape will change with the thawing of permafrost in a warming climate. This is the big picture, it is useful as a general idea of what we should expect on a circumpolar scale,” said Romanovsky, a researcher at the UAF Geophysical Institute.

One of the most important results of the project was developing a method to prepare a map that will help scientists and resource managers estimate the effects of a warming climate on permafrost in these regions, Romanovsky said. “In Alaska we can see that some areas will be more vulnerable than others. For example, you can see from the map that the Yukon Delta and the North Slope regions will probably undergo significant landscape changes.”