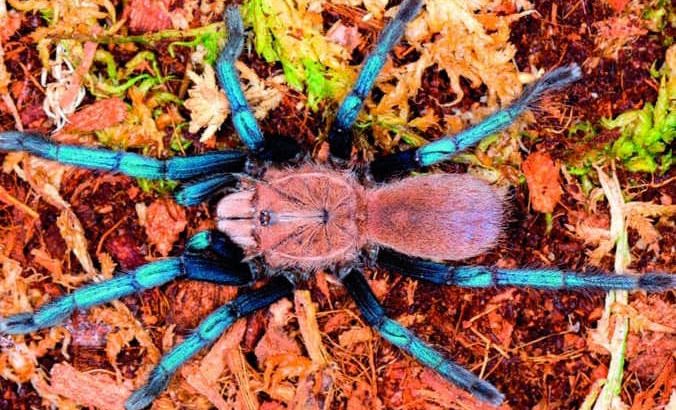 A new species of tarantula with bright blue legs has been described for the first time by arachnologists Ray Gabriel and Danniella Sherwood. However, there is controversy surrounding whether two specimens of the palm-sized tarantula were illegally removed from their habitats in Malaysia.

Wildlife photographer Chien Lee, who first posted a photo of the spider on Facebook in 2017, said the spider was “hands down” the most beautiful tarantula he had ever seen. Lee said it is possible that the experts were not aware that the spiders were obtained illegally. Lee theorizes that after he posted the image, collectors went out searching for the spiders.

However, experts in Britain believe that the proper procedures were followed. British Tarantula Society chairman Peter Kirk told MailOnline that he supports Lee’s claim that he originally found the new species. He said that the two specimens were received in “good faith,” adding that the society was told “they were legally collected with all appropriate paperwork needed.”

Kirk also explained that the collectors did not smuggle the tarantulas out of Malaysia, but that two dead spiders were mailed to Europe.

“It would be down to the Malaysians to sort out the paperwork, the collectors had a permit,” Kirk told MailOnline. “We published it from the authors without any reason to believe that the spiders were illegally obtained. How easy is it to identify someone selling something illegally?”

The spider has been classified as a new species in a new genus called Birupes simoroxigorum, named after the children of the three Malaysian collectors who provided the spiders. According to MailOnline, the spiders will be held at the Oxford University Museum of Natural History until they are sent back to Malaysia.

Birupes simoroxigorum is described in the Journal of the British Tarantula Society.