Tarantulas are on the move and migrating into new areas • Earth.com 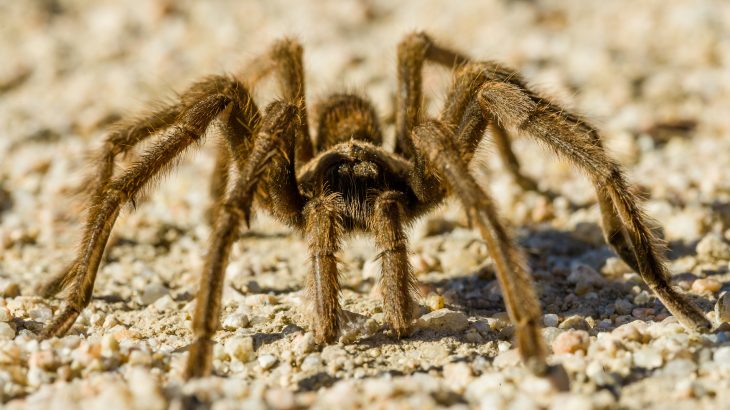 Tarantulas are on the move and migrating into new areas

It’s well known that birds migrate in the fall, and if you spend just a little time outdoors, you might see birds like Canada Geese are on the move as the weather gets colder.  V formations honking their way through the autumn sky are familiar throughout North America. But there’s another less known migration that some may find quite unsettling.

Each year through part of the American southwest, furry tarantulas come out and are seen wandering en masse across the landscape.  The largest number of spiders can be seen in Nevada but there are tarantulas to be found in the grasslands and canyon country of southeastern Colorado and throughout much of the southwestern US.  The northern and southern boundaries to the east for Tarantulas are the Missouri and Mississippi rivers, although non-native tarantulas have also been introduced to Florida. An article in The Gazette from 2013 reported that the tarantula’s range is extending further north as the planet warms.

I’ve personally seen tarantulas as far south as Ecuador where they sometimes hide burrows under the edge of buildings to get out of the tropical forest rains.  Tarantulas are spread throughout Central and South America as well as parts of Europe, Africa, Asia and all of Australia. There’s an endemic tarantula in the Seychelles, an island nation more known for giant tortoises off the coast of eastern Africa, not too far from Madagascar.  Worldwide there are more than 900 known species of tarantula.

Tarantulas are a group in the Theraphosidae family. In the US, there are more than 50 species of tarantulas.  Newsweek reported that as late as 2016, 14 new tarantula species were found in the US, including Aphonopelma johnnycashi, an all-black spider living in the hills near Folsom Prison and named after Johnny Cash.  That so many new species of tarantula could be found in a single year in one country shows how little we know about the group.  We do know why they come out of their seclusion this time of year, they’re not truly migrating, they’re searching.

Males are the only tarantulas you’re likely to see walking across the desert, crossing roads this time of year.  Female tarantulas actually stay near their burrows while the guys are out looking for mates. It’s a search fraught with danger.  Predatory wasps known as tarantula hawks (Pepsis sp.) buzz through the desert trying to find a tarantula to sting and paralyze being fed live to their young.  If a male tarantula isn’t hit by a car, stomped by a hiker or eaten by a predator, he may face the uncertain danger of actually meeting a female tarantula.  Sometimes the female spiders will kill and eat male tarantulas that don’t measure up to their expectations. Even if the female mates with a male, it’s no guarantee she won’t then kill and eat him.

Successful or not, male tarantulas will sometimes keep marching too.  Some unlucky males will be caught out in the freezing cold at the end of their mating season and die still looking for mates.  Other males may live for a few years, the longest lived being 10 or 12 years old but female tarantulas are very long lived, surviving for as long as 20 years. According to DesertUSA, female tarantulas can hatch as many as 500 to 1000 young in each mating.  The fact that each mating produces so many young helps explain why so many spiders can look across such broad landscapes as the desert of Nevada just on the chance of finding a mate.  Nevada is pretty desolate and the landscape is only spottily populated with spiders as with people, although you may not think that visiting the area in late summer or early fall.

Gabbs, Nevada is the home of the world’s largest tarantula ‘migration’, an occasion lionized by the high school’s official mascot, the tarantula.  It’s said that every fall, the spiders pour through the town, climbing screen doors, crossing streets, found wandering in houses. For those terrified by the large, furry arachnid, it’s good to be reminded that there’s much more danger for the spiders than there is for humans or their pets.

It’s true that in the Amazon there’s a tarantula known as the Goliath Birdeater (Theraphosa blondi) but even that is a bit of a misnomer.  The spiders are big enough to eat birds, sometimes growing to be 11 inches across, according to Wikipedia.  The name itself comes from a somewhat sensationalized illustration of one of the spiders eating a hummingbird but birds are not a common part of their diet.  Mostly this giant among spiders preys upon other invertebrates and occasional amphibians it can catch. In fact, this is about as scary as tarantulas get from an objective human perspective.

None of the tarantulas known to science living in the US have medically significant venom.  Tarantulas do have fangs capable of piercing human skin but they rarely bite, as many owners of pet tarantulas can attest.  The spiders are quite shy, usually hiding in burrows during the day and rarely coming into contact with people except when searching for mates in the fall.  Even if you’re unlucky enough to be bit by a tarantula, it’s been described as similar to a bee sting. There’s little reason to worry for most people bit by tarantulas, it’s usually just a passing, unpleasant experience.

Biting isn’t a tarantula’s only defense though.  The spiders are also armed with urticating hairs or bristles.  Located on the back of the tarantula’s body, these hairs are sharp bristles that can be irritating to sensitive parts of the body.  The spiders sometimes rub their legs together or over their abdomen to free the hairs. The hairs floating in the air can sometimes get into an eye or the mucus membrane of a nose or mouth.  The experience is little more than a sore throat or eye, the concept being a similar one to rolling in fibers from fiberglass that can also be irritating. Considering that a tarantula can be killed with a quick stomp, they’re quite defenseless to humans.

The name tarantula comes from the name for large spiders found near the town of Taranto, Italy.  It was in Italy that the Tarantella dance was supposedly performed to cure one from the bite of the spider.  The whole idea of the bite being dangerous or even the dance being used against spider bites at all is just hysteria.

Hysteria when it comes to spiders, especially the larger spiders like the tarantula is a common reaction on the part of humans.  If you’re lucky enough to see large spiders walking in numbers through your hometown or campsite, remember how lucky you are to be sharing the planet with creatures nothing like your own species.