The Amazon is rapidly approaching a tipping point • Earth.com 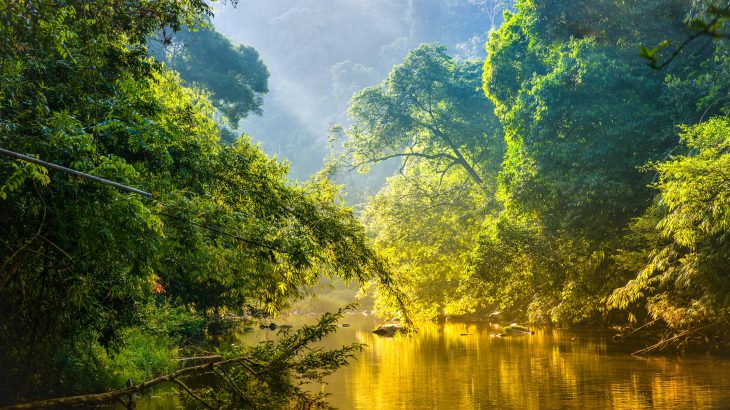 The Amazon is now closer to an irreversible tipping point than any other time in the last 100,000 years, according to Professor Mark Bush of the Florida Institute of Technology. Beyond this threshold, the Amazon will begin to permanently transition from lush forests to grasslands with few trees.

The transformation of the world’s most valuable rainforest has been fueled by land use changes associated with human activities such as deforestation. The study reveals that the primary force pushing the Amazon toward its tipping point is unregulated fires.

To track the evolution of fires and vegetation in the Amazon over time, Professor Bush analyzed fossil pollen and charcoal recovered from lake sediments dating back thousands of years. He found that fires were practically non-existent in Amazonia prior to the arrival of humans.

Earlier humans that inhabited the Amazon in the last 10,000 years caused only small-scale disturbances that the forest was able to recover from. Modern forest fires, however, are intensified by various effects of anthropogenic climate change like drought and rising temperatures.

The combination of more intense fires and deforestation could ultimately create conditions where vast areas of rainforest will transition into savanna in a matter of decades.

“The immense biodiversity of the rainforest is at risk from fire,” said Professor Bush. He emphasizes that while no individual government can control climate change, fire can be regulated through policy.

Almost all of the fires in the Amazon are set intentionally and have become much more frequent in the last two years due to policy changes.

According to his analysis, Professor Bush predicts the Amazon will reach a tipping point when temperatures rise by another 2 to 3 degrees Fahrenheit.

The Earth is set to reach these temperatures by the end of this century as a result of global warming, but the hotter, drier landscapes that are created by fires in the Amazon accelerate this heat and therefore push the rainforest closer to a tipping point.

“Warming alone could induce the tipping point by mid-century, but if the present policies that turn a blind eye to forest destruction aren’t stopped, we could reach the tipping point much sooner,” said Professor Bush.

“Beyond the loss of wildlife, the cascading effects of losing Amazonian rainforest would alter rainfall across the hemisphere. This is not a remote problem, but one of global importance and critical significance to food security that should concern us all.”

The study is published in the Annals of the Missouri Botanical Garden.