The Congo Basin could release billions of tons of carbon • Earth.com 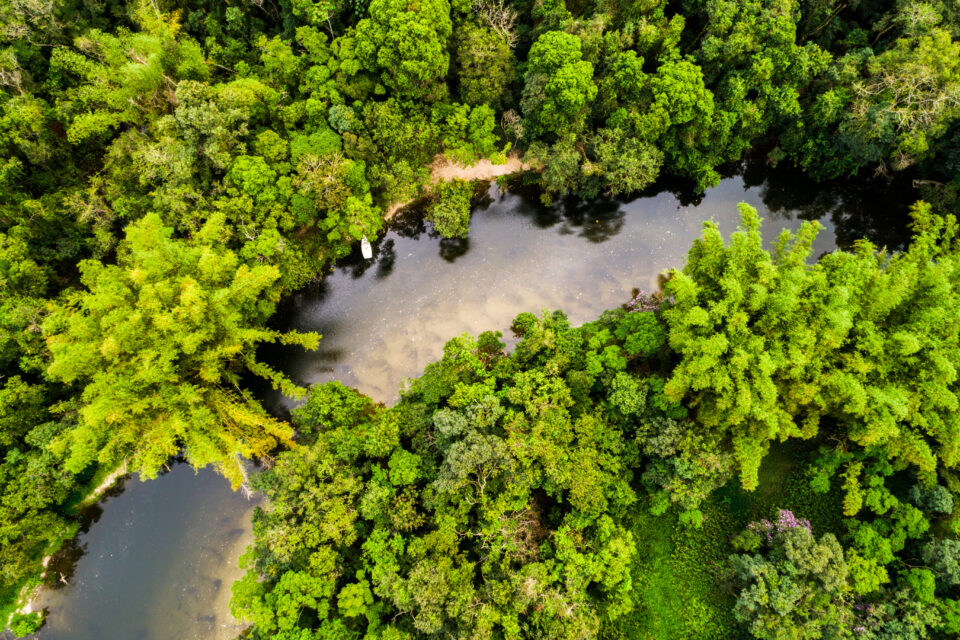 The Congo Basin could release billions of tons of carbon

The central Congo Basin is home to the world’s largest tropical peatland complex, covering an area of around 16.7 million hectares, which is bigger than the area of England and Wales combined. Unlike temperate peat bogs that mostly accumulate carbon in the form of mosses, these peatlands underlie lush tropical forests and contain organic matter from the fall of leaves and forest debris. In addition, they are influenced by the movement of water from rivers and have been a source of food and resources for local people for thousands of years.

The Congo Basin spans across six central African countries, but the peatlands occur mostly within the Republic of Congo (ROC) and the Democratic Republic of Congo (DRC). Due to the remote and inaccessible location of these peatlands, little research has been done on how the ecosystems function, although a previous study estimated that 29 Pg of carbon is stored below ground in peat across the region. (A Petagram is equivalent to a Gigaton and equals one billion metric tons.)

With the uncertainties surrounding the effects of climate change, scientists are concerned that this massive amount of stored carbon may be released into the atmosphere and contribute further to greenhouse gas concentrations. In order to understand the history of the Congo Basin peatlands, Congolese and European researchers have now taken samples of peat from beneath the remote swamp forests in the region. The results of their analysis, published in the journal Nature, carry a sober warning for the entire world, particularly as environmental leaders gather at the COP27 climate talks next week.

The research, led by scientists from the University of Leeds, involved analyzing plant remains in samples taken at depths beneath the surface of the peat. The scientists used waxes from plant leaves preserved in the samples to calculate the rainfall levels at the time that the plants were living. This enabled them to reconstruct a record of the vegetation and rainfall in the central Congo Basin over the last 17,500 years, from when the peat began to form.

The record showed that peat was accumulated gradually in the region up to around 7,500 years ago. During this time, the peat acted as a store of carbon. However, between 7,500 and 2,000 years ago, the peat layers either decomposed or never accumulated. The researchers described this as the “ghost interval.” This same ghost interval was found in peat samples from hundreds of kilometers away in the DRC indicating it happened across the whole peatland region.

“The peat samples show us that there was a period of around 5,000 years when there was almost no build-up of peat, less than 0.1 mm per year. The samples also reveal what the rainfall and vegetation was like when the peat was formed. Together they give a picture of a drying climate that got progressively drier until about 2,000 years ago,” explained study lead author Dr. Yannick Garcin of the National Research Institute for Sustainable Development of France.

At the height of this drought, rainfall was reduced by at least 800 mm a year. This caused the water table in the Congo peatlands to drop, exposing older layers of peat to the air, which led to decomposition and the release of carbon dioxide. The peatlands only stopped releasing carbon and reverted back to taking carbon out of the atmosphere when the climate got wetter again in the past 2,000 years, according to the results of the study.

“This drought led to a huge loss of peat, at least 2 meters,” said Dr. Garcin. “The drought flipped the peatland to a huge carbon source as the peat decomposed. This decomposition only stopped when the drought stopped, allowing peat to start accumulating again.”

The scientists warn that, while the peatlands are currently largely intact and managed sustainably by local people, they are vulnerable. If current global warming produces drying effects in the Congo region, history could repeat itself and 30 billion tons of carbon from decomposing peat could end up in the atmosphere. This is equivalent to all the emissions from burning fossil fuel globally over a three-year period, and the impact on climate change could be catastrophic.

“Our study brings a brutal warning from the past. If the peatlands dry beyond a certain threshold they will release colossal quantities of carbon to the atmosphere, further accelerating climate change,” said study senior author Professor Simon Lewis. “There is some evidence that dry seasons are lengthening in the Congo Basin, but it is unclear if these will continue. But evidence from our study shows that drier conditions have existed in the past and did trigger a breakdown of the peatlands as a store of carbon.”

“This is an important message for world leaders gathering at the COP27 climate talks next week. If greenhouse gas emissions drive the central Congo peatlands to become too dry, then the peatlands will contribute to the climate crisis rather than protect us,” emphasized Professor Lewis.

In addition to the threat of the peatlands getting drier from climate change, the region is subject to additional pressures which could cause damage to the fragile peatland ecosystem. These include draining the peatlands for industrial-scale agriculture, logging, and oil exploration. The central Congo peatlands are home to a rich biodiversity, including forest elephants, lowland gorillas, chimpanzees and bonobos, all of which form part of this globally important but threatened ecosystem.

Professor Corneille Ewango from the University of Kisangani in the Democratic Republic of the Congo, led the expeditions to collect the peat samples from the DRC.

“This is another astonishing finding about the peatlands. They are more vulnerable than we thought, and everyone must play their role in protecting them,” said Professor Ewango. “Polluting countries must cut their carbon emissions fast, to limit the possibility of droughts pushing the peatlands past their tipping point. The DRC will also need to strengthen protection of the peatlands. At stake is one of the most wildlife and carbon-rich ecosystems on Earth.”